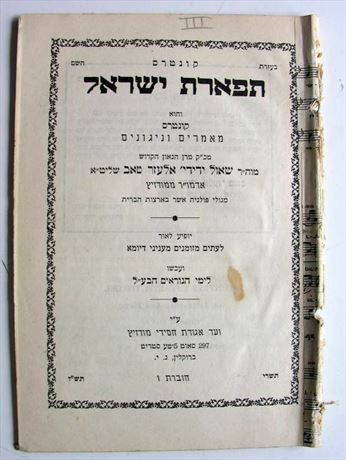 Rare booklet with Torah discourses and musical compositions by R. Saul Jedidiah Eleazar Taub R. Saul Jedidiah Eleazar Taub of Modzhitz. The text, in both Yiddish and Hebrew, also includes a full size photo of R. Taub and three full pages of musical notes. The Hasidic dynasty of Modzhitz is especially well-known for their Hasidic melodies. Kunteres Ma'amarim was published as a periodical in Europe from 1936 through 1938. Although the back cover of this American issue, in English, says that the income from this issue is dedicated for the forthcoming issue it is not known if additional issues were published in the United States. Among the topics addressed are Hanukkah, Erez Israel, words of Torah from several Modzhitzer rebbes, concluding with Heimische Neis.

R. Saul Jedidiah Eleazar Taub of Modzhitz (1882-1947) was born in Ozarov, son of R. Israel Taub of Modzhitz. Although R. Taub did not receive any formal musical training he has been described as having music in his veins, was a great tenor, and drew many to hasidus through his music. He lived in Rakov and Karszev, and then moved to Otwock in 1929. Among his visitors were Sholem Asch and Hillel Zeitlin. R. Taub visited Erez Israel in 1925, 1935, and 1938. He vociferously denounced the British White Paper of 19939 restricting Jewish immigration to Erez Israel. R. Taub established a yeshivah named Tiferet Yisrael after the title pf one of his father’s books. With the onset of World War II R. Taub fled to Vilna, and then traveled, via Siberia and Japan, to the United states, arriving there in 1940. He settled in Williamsburg, and resumed publication of his father’s commentary on Leviticus. In 1947, R. Taub settled in Erez Israel, dieing there on November 27, 1947, the same day that the United Nations recommended the establishment of a Jewish state. He was the last person to be buried on the Mount of Olives, just before the Jordanian occupation. There was not even time to place a tombstone on his grave, a situation rectified in 1967 when Israel recaptured all of Jerusalem. R. Taub’s book Imrei Shaul on festivals was published by his sons (Tel Aviv, 1960).