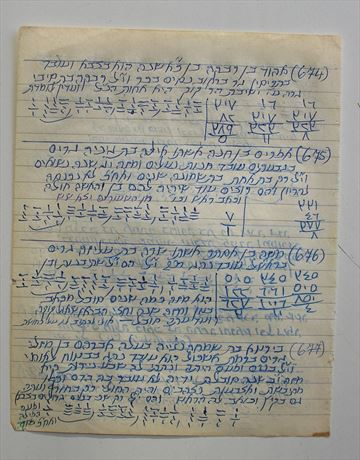 R. Yitzhak Kaduri (Kadouri), (d. 2006), was a renowned Mizrahi Haredi rabbi and kabbalist who devoted his life to Torah study and prayer on behalf of the Jewish people. He taught and practiced the kavanot of the Rashash. His blessings and amulets were also widely sought to cure people of illnesses and infertility. In his life, he published no religious articles or books. At the time of his death, estimates of his age ranged from 110 to 118, and his birth year is still disputed.

He was born in Baghdad, in 1902 which was verified with mishpacha magazine live interview with the rabbi back in 2005. Baghdad which was then part of the Ottoman Turkish vilayets, to R. Katchouri Diba ben Aziza, a spice trader. As a youngster, Kaduri excelled in his studies and began learning Kabbalah while still in his teens, a study that would last his entire life. He was a student of the Ben Ish Chai (Rabbi Yosef Chaim of Baghdad) and studied at the Zilka Yeshivah in Baghdad. R. Kaduri moved to the British Mandate of Palestine (Eretz Israel, the Holy Land) in 1923 upon the advice of the elders of Baghdad, who hoped that his scholarship and piety would stop the incursion of Zionism in the post-World War I state. It was here that he changed his name from Diba to Kaduri.

He went to study at the Shoshanim LeDavid Yeshiva for kabbalists from Iraq. There he learned from the leading kabbalists of the time, including R. Yehuda Ftaya, author of Beit Lechem Yehudah, and R. Yaakov Chaim Sofer, author of Kaf Hachaim. He later immersed himself in regular Talmudic study and rabbinical law in the Porat Yosef Yeshiva in Jerusalem's Old City, where he also studied Kabbalah with the Rosh Yeshivah, R. Ezra Attiya, R. Saliman Eliyahu (father of Sephardic Chief Rabbi Mordechai Eliyahu), and other learned rabbis. In 1934, Rabbi Kaduri and his family moved to the Old City, where the Porat Yosef Yeshivah gave him an apartment nearby with a job of binding the yeshivah's books and copying over rare manuscripts in the yeshivah's library. The books remained in the yeshivah's library, while the copies of manuscripts were stored in Rabbi Kaduri's personal library. Before binding each book, he would study it intently, committing it to memory. He was reputed to have a photographic memory and also mastered the Talmud by heart, including the adjoining Rashi and Tosafot commentaries.During the period of Arab-Israeli friction that led up to the 1948 Arab Israeli War, the Porat Yosef Yeshivah was virtually turned into a fortress against frequent flashes of violence. When the Jewish quarter of the Old City fell to the invading Jordanian Army during the 1948 Arab-Israeli War, the Jordanians set fire to the yeshivah and all surrounding houses, destroying all the books and manuscripts that Rabbi Kaduri could not smuggle to Beit El Yeshiva (Yeshivat HaMekubalim) in Jerusalem. He knew all the writings of R. Yitzhak Luria, the founder of modern Kabbalah, by heart. After the passing of the leading kabbalist, R. Efraim Hakohen, in 1989, the remaining kabbalists appointed R. Kaduri as their head. R. Kaduri did not publish any of the works that he authored on Kabbalah; he allowed only students of Kabbalah to study them. He did publish some articles criticizing those who engage in "practical Kabbalah", the popular dissemination of advice or amulets, often for a price. He also spoke out against the development of cult organizations frequented by pop celebrities. "Kabbalah should not be taught to non-Jews," he explained.