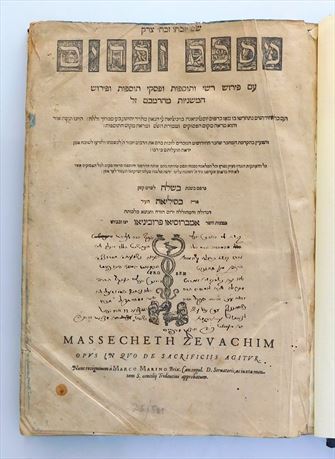 Zevachim (Hebrew: זְבָחִים; lit. "Sacrifices") is the first tractate of Seder Kodashim ("Order of Holiness") of the Mishnah, the Talmud and the Tosefta. This tractate discusses the topics related to the sacrificial system of the Temple in Jerusalem, namely the laws for animal and bird offerings, and the conditions which make them acceptable or not, as specified in the Torah, primarily in the book of Leviticus (Lev 1:2 and on). The tractate has fourteen chapters divided into 101 mishnayot.

Printed according to the Council of Trent's strictures, this is the most heavily censored edition of the Babylonian Talmud. Passages considered offensive were expurgated, while others were modified to make the contents acceptable to the censors. In some instances, marginal comments were appended presenting a Christian position or interpretation of the text. Tractate Avodah Zarah was entirely omitted, its name and subject matter- idolatry- sufficient enough to disqualify it.

Alterations were not made in a systematic manner, so that entries expurgated or modified in one place may have been left intact elsewhere. Nevertheless, some criteria were applied consistently. All references to Rome or Edom were understood as euphemisms for the Church, even if the clear intent was the pre-Christian classical period. For example, Berakhot 62b states, "A Roman, (אדומי) thrust Rabbi Eliezer away from a certain spot, when immediately a snake, which had been hiding there, bit the offender mortally. Then the Rabbi called out [citing Isaiah 43:4], 'I give men (אדם) in exchange for you.''' 'Persian' was substituted for 'Roman' (Edomite), rendering the entry meaningless. Anthropomorphic statements, such as, "And G-d made a noise over them like the crowing of roosters" (Taanit 29a) and "If anyone strike an Israelite on the cheek it is as though he had struck the cheek of the Holy One" (Sanhedrin 56b), were excluded. References that did not reflect well on Church practices were also expurgated or altered. Yevamot 63a was modified from "any man who is not married is not a [whole] man" to "any Jew who is unmarried ... ," reputedly done to exclude the celibate members of the priesthood from the rule.

The Basle printer Ambrosius Froben was convinced of and sympathetic to the need for a new Talmud edition, and aware of the business possibilities. He secured approval to print the Talmud from the Basle city council and Church authorities in a manner consistent with the Council of Trent's strictures. He obtained a resident permit for a learned Jew to supervise his press. That individual was Israel ben Daniel Zifroni ha-Ashkenazi, an It Jew and a printer of repute. Zifroni was accompanied R. Jacob ben Isaac Luzzatto of Safed, who served as final corrector, and whose glosses defending the aggadah appear in part in this Talmud. Printing was under supervision of the Venetian inquisitor, Marco Ma Brixiense (of Brescia). The title pages of tractates without Marino's name state that they were printed in accordance with the Tridentine Index and that the volume does contain anything offensive to Christianity.

Not surprisingly, Jews rejected the Basle edition whenever an opportunity occurred to acquire an uncensored edition, such as those published in the Ottoman Emire or Poland. Publishers, unless required to do so, " unwilling to acknowledge that their edition was based on this printing. Throughout the eighteenth and nineteenth centuries, new editions of the Talmud were characterized by the progressive restoration of expurgated passages and the printing from Venetian and other later-corrected editions. When this could not be done, supplemental volumes known as Hesronot ha-Shas were printed to provide reader with the correct reading and the deleted passages.