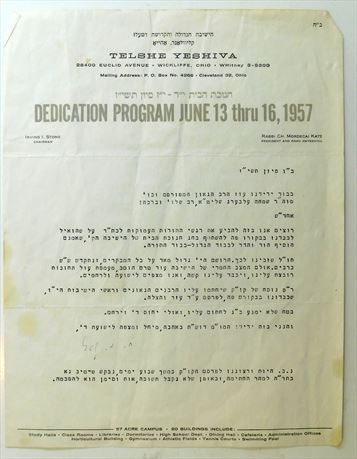 Letter by R. Chaim Mordechai Katz (1894-1964) was an Orthodox rabbi, the Rosh Yeshiva of the Telshe Yeshiva in Cleveland, and among American Jewry's foremost religious leaders. R. Katz was born in 1894 in Shadova, Lithuania. As a young man, he studied in the yeshiva in Shadova, under the tutelage of the town's rabbi and Rosh Yeshiva, R. Yosef Leib Bloch. In 1910, he went to study in the Knesses Beis Yitzchak yeshiva in Slobodka for a year, following which, in 1911, he returned to study under R. Bloch, who had been appointed as Chief Rabbi and Rosh Yeshiva in Telz. In 1914, Katz went to the Volozhin Yeshiva for two years where he was ordained by R. Refael Shapiro, the son-in-law of the Netziv. In 1916 he studied under R. Shlomo Polachek, the renowned "Maitziter Illuy". In 1918 he returned to Telz, where he married Perel Leah, Bloch's daughter.

In 1920, R. Katz assisted his father in law in the founding of a preparatory school for young men (Mechina), which would prepare younger students for study in the yeshiva proper. R. Katz was appointed director of the Mechina. In 1922, a postgraduate institute (Kollel) was founded in Telz and he was appointed Head of the Institute. In 1930, R. Katz's father, wife, third oldest child (Shmuel, aged six) and father in law died. The following year he married Chaya Kravitz, R. Bloch's niece. In 1934, R. Katz was one of the founders of the Zeirei Agudath Israel in Lithuania and he served as the head of the Board of Action (Va'ad Hapoel). Together with his brother in law, R. Eliyahu Meir Bloch, he also served as one of the editors of the Agudah newspaper in Lithuania: "Dos Yiddishe Lebben". He participated in the first Knessiah Gedolah of the Agudath Israel in 1923 and at the third Knessiah Gedolah in 1937 he was appointed a member of the International Action Committee (Va'ad Hapoel Ha'olami).

In 1940, R. Katz and R. Eliyahu Meir Bloch managed to travel out of Soviet occupied Lithuania and make their way to the United States, in the hope of re-establishing the Rabbinical College of Telshe and bringing over its faculty and student body. Both R. Katz and R. Bloch were unable to bring their wives and children, the fate of whom remained unknown to them until 1944. In October 1942 R. Katz and R. Bloch re-established the Telz Yeshiva in Cleveland, Ohio. Together, in 1943 they established a Jewish day school: The Hebrew Academy of Cleveland. Towards the end of the war Katz discovered that his wife and 10 children had been killed by Nazi forces in Telz in 1941. R. Bloch's family suffered a similar fate. In 1946 R. Katz married Esther Mindle Mandel. In 1947 R. Katz and R. Bloch established a Hebrew School for girls in Cleveland called Yavneh, under the framework of the Hebrew Academy of Cleveland.

Affectionately known by his students as Reb Mottel, Katz was a Lithuanian born and trained rabbi who was catapulted into a very different social setting than he was accustomed. Despite the great differences in American perspective, he successfully bridged any gaps with his students, and succeeded in educating and inspiring them. Under his leadership, the Telz Yeshiva grew to its largest. He was a master educator and communal activist who was exacting in his attention to detail. He used to say: "To a big man there are no such things as small things".