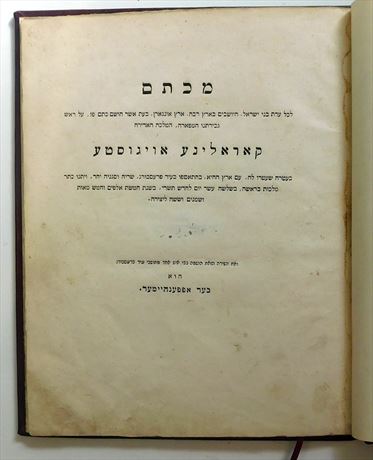 Prayer service in Hebrew and German in honor of her ascension to Queen of Hungary. Caroline Augusta of Bavaria (German: Karoline Auguste von Bayern; Mannheim, 8 February 1792 – 9 February 1873 in Vienna) was a daughter of Maximilian I Joseph, King of Bavaria (1756–1825) and his wife, Augusta Wilhelmine of Hesse-Darmstadt (1765–1796), and a member of the House of Wittelsbach. She was married to Crown Prince William of Württemberg and to Francis II, Holy Roman Emperor. From 1816-1835 she was Empress of Austria in her second marriage. On 8 June 1808, at Munich, she married Crown Prince William of Württemberg (1781–1864). They divorced on 31 August 1814. They had no children. Her first marriage was arranged to avoid a political marriage arranged by Napoleon. After the marriage ceremony, her spouse said to her: We are victims to politics. They lived separated in the palace and the marriage was never consummated. She spent her time writing letters to her brother Louis, and learning Italian and English. Her first marriage was dissolved by Pope Pius VII to ensure that they both be able to marry again according to the Catholic Church. On 29 October 1816 she married Francis I, Emperor of Austria, King of Hungary and Bohemia. They had no children. Prior to this marriage, she has always been known as Charlotte, but now began using Caroline. Both the Emperor and his brother Ferdinand proposed to her, and Ferdinand took back his proposal so that she could accept the Emperor's. The marriage was simple due to the strict economy of the Emperor. She became popular in Austria and was active in social work; she founded several hospitals and residences for the poor. Empress Caroline was described as elegant, likable, religious and intelligent. After the death of her spouse, she moved to Salzburg. She was good friends with both her sister Archduchess Sophie and her niece Empress Elisabeth.