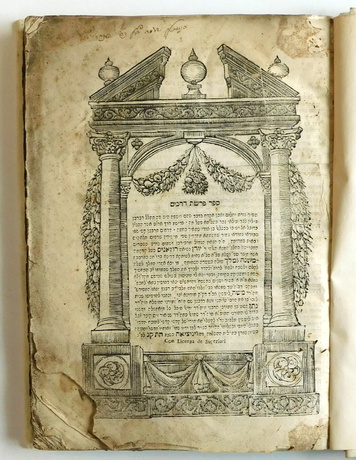 Kabbalah by R. Judah b. Samuel Rozanes (1657–1727), Turkish rabbi, posek, and preacher. Rosanes was born in Constantinople. He studied under R. Solomon ha-Levi the Elder and R. Joseph b. Isaiah Trani (grandson of R. Joseph b. Moses Trani). In his youth he worked in the business of Abraham Rosanes, his uncle and father-in-law, who had business connections with the Turkish army. After his uncle's death, R. Judah engaged in business with his two brothers, Hayyim and Aaron. Later he was appointed to the rabbinate of Constantinople, where he served until his death. He was regarded as one of the greatest Turkish rabbis of his time and was among the rabbis of Constantinople who persecuted the Shabbateans there. In 1714 he was one of the signatories to the ban of excommunication against Nehemiah Hiyya Hayon that was circulated to the whole Diaspora. In 1725, however, three Constantinople rabbis, of whom Judah was one, released Hayon from the excommunication on condition that he abandon the study of Kabbalah and Shabbatean beliefs. The rescinding of the excommunication angered the other rabbis of the town. Apparently this was the reason for zealots breaking into his house and destroying his writings. What remained of his writings was collected after his death and prepared for publication by his pupil, R. Jacob Culi. His Mishneh la-Melekh, novellae and disquisitions on Maimonides' Mishneh Torah, was first published in Constantinople in 1731 and later reprinted together with the text and other commentaries. Since then his commentary has been published in most editions of the Mishneh Torah. R. Rosanes' fame rests upon this work, one of the most erudite and penetrating commentaries on the Mishneh Torah. R. Rosanes' second work, published by R. Culi, was Parashat Derakhim (Constantinople, 1728), containing 26 sermons on halakhah and aggadah, and appended to his Derekh Mitzvotekha on the 613 commandments of the Torah according to the enumerations of Maimonides, Nahmanides, and R. Moses b. Jacob of Coucy. The book also contains his notes and glosses to Sefer ha-Hinnukh, attributed to Aaron ha-Levi of Barcelona. Excerpts from the Parashat Derakhim were published also in the Mikhlal Yofi (Frankfort on the Oder, 1775) of R. Isaac b. Ben Zion of Apta. Some of his responsa are to be found in the works of his contemporaries. A definite trend toward leniency is discernible in his rulings and commentary. He even regarded apostates as having been compelled to change their religion by force majeure.

R. Rosanes is not to be confused with the Shabbatean Judah Rosanes who lived in the mid-17th century and was one of the Constantinople scholars who excommunicated the two Smyrna rabbis R. Aaron Lapapa and R. Solomon (Nissim) b. Abraham Algazi I in 1666, after they excommunicated Shabbetai Zevi.