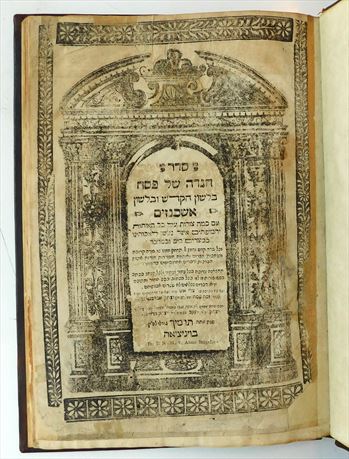 Profusely illustrated haggadah with Italian translation. Each page within architectural frame with a woodcut illustration as the base. Included are the Zeli Esh, the abbridged Zevah Pesah commentary by Don Isaac b. Judah Abravanel (1437-1508). He received a careful education and was a pupil of R. Joseph Hayyim, rabbi of Lisbon. Well versed in Talmudic literature and in the learning of his time, endowed with a clear and keen mind, and full of enthusiasm for Judaism, he devoted his early years to the study of Jewish religious philosophy,and when scarcely twenty years old wrote on the original form of the natural elements, on the most vital religious questions, on prophecy, etc. His political abilities also attracted attention while he was still young. He entered the service of King Alfonso V. of Portugal as treasurer, and soon won the confidence of his master. Notwithstanding his high position and the great wealth he had inherited from his father, his love for his afflicted brethren was unabated. When Arzilla, in Morocco, was taken by the Moors, and the Jewish captives were sold as slaves, he contributed largely to the funds needed to manumit them, and personally arranged for collections throughout Portugal. He also wrote to his learned and wealthy friend Jehiel, of Pisa, in behalf of the captives. After the death of Alfonso he was obliged to relinquish his office, having been accused by King John II. of connivance with the duke of Bragança, who had been executed on the charge of conspiracy. Don Isaac, warned in time, saved himself by a hasty flight to Castile (1483). His large fortune was confiscated by royal decree. At Toledo, his new home, he occupied himself at first with Biblical studies, and in the course of six months produced an extensive commentary on the books of Joshua, Judges, and Samuel. But shortly afterward he entered the service of the house of Castile. Together with his friend, the influential Don Abraham Senior, of Segovia, he undertook to farm the revenues and to supply provisions for the royal army, contracts that he carried out to the entire satisfaction of Queen Isabella. During the Moorish war Abravanel advanced considerable sums of money to the government. When the banishment of the Jews from Spain was decreed, he left nothing undone to induce the king to revoke the edict. In vain did he offer him 30,000 ducats ($68,400, nominal value). With his brethren in faith he left Spain and went to Naples, where, soon after, he entered the service of the king. For a short time he lived in peace undisturbed; but when the city was taken by the French, bereft of all his possessions, he followed the young king, Ferdinand, in 1495, to Messina; then went to Corfu; and in 1496 settled in Monopoli, and lastly (1503) in Venice, where his services were employed in negotiating a commercial treaty between Portugal and the Venetian republic (Zurita, "Historia del Rey Don Fernando el Católico," v. 342a).