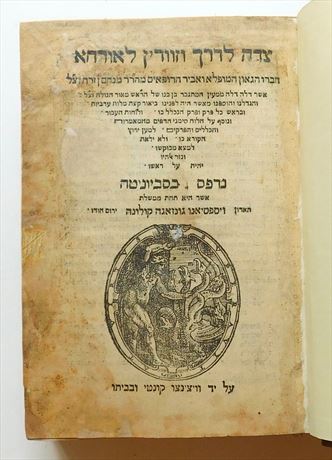 A concise code of law, unique in that it is directed towards the wealthier strata of Jewish society. The parents of the author, R. Menahem ben Aaron ibn Zerah (c. 1310-1385), were among the Jews expelled from France in 1306, settling in Estella, Navarre, where Menahem was born. In the introduction to Zeidah la-Derekh, he relates how the popula­tion rose against the Jewish community of Estella in 1328, massacring 6,000, among them his parents and four younger brothers. He was left for dead, but a knight, a friend of his father, found him, removed him from among the dead, brought him home and nursed him back to health. After he recovered, R. Menahem went to Toledo, where he studied under R. Joshua ibn Shuaib and R. Judah ben Asher, grandson of the Rosh. He subsequently went to Alcala de Henares (in the vicinity of Toledo), where he studied under R. Joseph ben al-Aysh, whom he succeeded as rabbi in 1361. Eight years later a civil war between two aspirants to the throne left Menahem impoverished. The courtier Don Samuel Abra­banel interceded on his behalf and R. Menahem was appointed rabbi of Toledo and head of the rabbinical academy.

R. Menahem composed Zeidah la-Derekh for the honor and benefit of Don Samuel, whom R. Menahem praises in the introduction. The book is directed towards the wealthy, who, because of their responsibilities and lifestyle, including social intercourse with non-Jews, are not always rigorous in the performance of muroot, nor do they have sufficient times to master a detailed code. His code, therefore, is directed towards the practical. It pro­vides, as its name Zeidah la-Derekh "provision for the way" (Genesis 42:25, 45:21) implies, the traveler's necessities, not too burdensome to bear. In addition to its halakhie content, Zeidah la-Derekli provides reasons, based on the Rambam, for commandments, philosophi­cal and moral precepts, and medical advice.

Zeidah la-Derekli is divided into five ma'amarim (articles), further divided into kelalim (rules), which are subdivided into 372 perakim (chapters). The ma'amarim are: 1) prayers, blessings, tijillin and zizit; 2) issur oe-hetter (dietary laws); 3) laws of matrimony and divorce; 4) laws pertaining to the Sabbath and festivals; and 5) fast days and the laws of mourning. This last part is completed with a discussion of the com­ing of the messiah and the resurrection of the dead. In this, the first edition of Zeidah la­Derekh, the section on the Amidah includes a discussion of the twelfth benediction, malshinim (slanderers, informers), added to that group of prayers at the beginning of the Common Era. This paragraph, comprising almost an entire leaf, is omitted from later editions of Zeidah la-Derekh and the enumeration of the prayers comprising the Amidah was corre­spondingly adjusted. In some instances, rather than ink out so many lines, the entire quire was removed.

R. Menahem ben Aaron ibn Zerah, despite his sufferings, expresses great tolerance, not­ing that a non-Jew who fulfills those commandments that are incumbent upon him, that is, the seven Noahide mitroot, is better than a Jew who does not observe muroot.