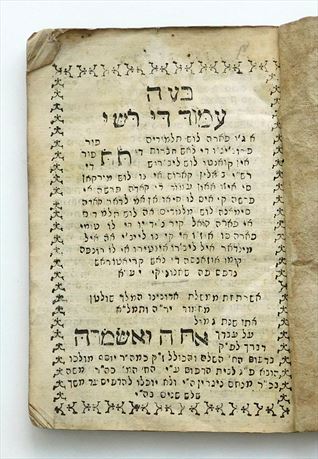 Rare - most copies destroyed by student use.

The first Rashi commentary of each weekly portion in a small pocket size booklet.

The beginning of Ladino literature may be traced to the 13th century with the translation of the Bible into Ladino. These translations, however, were in Latin script and it is only after the expulsion of the Jews from Spain that Ladino translations of the Bible were written in Hebrew script and the language acquired a distinctly Jewish character. Another major literary activity in religious Ladino literature was the translation of exegetical and ethical works, moral handbooks, and prayer books. A number of original works were also produced such as Almosnino 's popular Il Regimiento de la Vida (Salonika, 1564), an ethical treatise which included a long dissertation on dreams. Most of Almosnino's works, however, were in Hebrew, although his compilation of data on Constantinople in Ladino, which Jacob Cansino of Oran later published in Spanish under the title Extremos y Grandezas de Constantinopla, is a major work in Spanish Jewish literature and a significant historical source.

By the end of the 17th century poetry, mystical writings, biblical exegesis, history, and ethics were written in Ladino. Me-Am Lo'ez , the monumental ethical-religious work of Ladino literature, is an elaborate encyclopedic commentary on the entire Bible which in 1730 was initiated by Jacob *Culi who wrote the commentary on Genesis and a portion of Exodus. It is assumed that the subsequent commentaries are in part based on his manuscripts. The work, written in a popular style, was intended to make the Bible and Jewish learning readily understandable to the layman who no longer was able to use the Hebrew texts. Among original works of religious poetry in Ladino are Proverbios morales by Shem Tov (*Santob) de Carrion (14th century) and the Poema de Yosef, probably composed at the beginning of the 15th century, which is an adaptation of the story of Joseph and his brethren from the Midrash and Sefer ha-Yashar. The poem's strophic and metric form, influenced by the Hebrew piyyut, is also reminiscent of the cuaderna via literary structure which was developing at the time. Written also in Spanish in Arabic characters, the poem became an integral part of Spanish literature. The popular Ladino poem on the same subject, Coplas de Yosef ha-Ẓaddik, by Abraham de Toledo (1732), is known in two distinct versions: one written in Constantinople (1732) and the other in Belgrade (1861) which is based on the lost Salonika version (1755). The poem, consisting of 400 quatrains, was also sung on Purim. The copla genre which flourished in Ladino in the 19th century was mainly the poetic expression of minor works written for Purim (Coplas de Purim).

A distinctly secular mode of expression in Ladino literature is the romancero which formed part of the oral tradition of Jews in Spain. The Ladino romancero is largely a continuation and an adaptation of the Spanish romancero of the Middle Ages and the Renaissance. The original romancero, a traditional Spanish ballad widely popular in the 14th and 15th centuries, was often sung. There are also many original romances and songs in Ladino or later composition. The different types of romanceros found in Spanish literature (historical, tragic, humorous, amorous, satirical) were also found in Ladino, to which have been added three specifically Jewish types: wedding songs, religious hymns, and laments. Other secular literature in Ladino are adaptations and translations of plays and novels, mainly from French literature. This led to the writing of original plays and novels, most of which, however, are of an inferior quality.