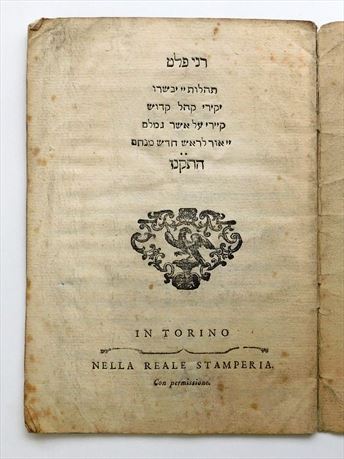 Liturgical service and poem in honor of the rescue and liberation of the Jewish community of Chieri during the Napolenic War. The booklet includes a full description of the events. R. Joshua Benion Segre (c. 1705–c. 1797), Italian dayyan and rabbi. Born probably in Casale Monferrato, R. Segrè went to Scandiano in 1735 or 1736 as a children's tutor (melammed tinokot), but pretended to function as a fully fledged teacher (moreh hora'ah), claiming that he had graduated at the Mantua yeshivah. This claim caused him to quarrel with the rabbis of Reggio Emilia under whose jurisdiction he came. At the age of 23 he had already shown his taste for polemics by writing Asham Talui against Christianity in which, although not particularly well versed in Latin, he attempted mainly to prove that Jerome had made many errors in his translation of the Old Testament. Hè also wrote a polemic against Guilio Morosini's Derekh ha-Emunah (La Via della Fede). As well as writing commentaries on the Bible, Kabbalah, and halakhah, he was the author of a commentary on Psalms, Ẓorer u-Moreh (a summary of the laws of terefah), a booklet on Hebrew grammar, and an Italian translation of the principal prayers, partly in verse. The works were never published. His booklet Kol Omerim Hodu (Mantua, 1740) celebrates the inauguration of a reconstructed synagogue in Scandiano, financed by the Almansi family (in whose house the synagogue was located).