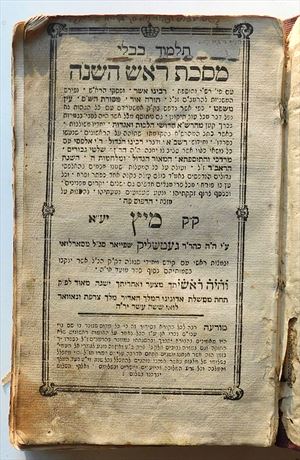 Reduced size edition for easy portability. The volume is printed so that the content of each two pages match the content of one in the larger edition. With many commentaries.

This edition of the Talmud was authorized to be printed for selected Tractates only and in a pocket size, so as not to compete with the Proophs of Amsterdam edition. Despite the efforts and the many approbations issued for the edition, the printer was unsuccessful in selling his inventory. The Sulzbach edition published at the same time provided stiff competition and as a result the effort was terminated with this tractate.

Tractate Rosh ha-Shanah (New Year), eighth tractate in the order of Mo'ed; in some earlier Mishnah and Talmud editions it is seventh, and in current Talmud editions it is placed fifth. Although Rosh Ha-Shanah is the rabbinic designation for one of the major festivals of the Jewish calendar, that which falls in "the seventh month, on the first day of the month" (Lev. 23:24), the tractate does not deal exclusively with this New Year. It opens with the statement that there are four days of the calendar, each of which is a New Year for its own specific purpose. Thus the first of Nisan is the New Year for kings and for festivals, and the 15th of Shevat (or the first) the New Year for trees. However, the first day of Tishri, the "New Year for years," i.e., the beginning of the calendar year, became known as the New Year par excellence, and the bulk of the tractate's discussion is elaboration of the laws concerning it, its religious significance, and the details of the sounding of the shofar. In mishnaic times, though the authorities were familiar with astronomical calculations, the New Moon was fixed on the basis of observation, which meant that, as a rule, the bet din formally proclaimed the New Month only after it had heard evidence of witnesses who had actually seen the new moon.

Tractate Rosh Ha-Shanah is characterized particularly by two topics. The first is the intercalation of the year and how and when and for what reasons intercalation is effected, and what are the considerations which normally influence the determination of the yearly calendar. The second is a systematic, philosophical, speculative discussion on everything concerning providence, and reward and punishment in this world and in the next. These topics are much better arranged and edited than others and more systematically than in all other tractates.