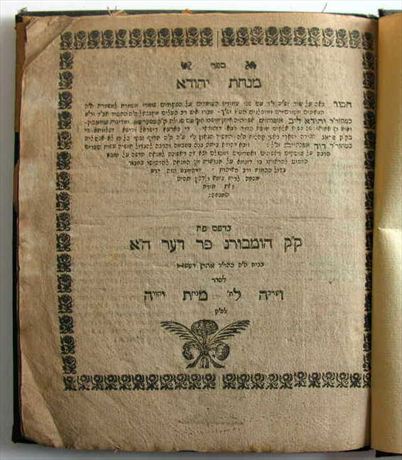 Only edition of these novellae on the Tur Shulhan Arukh Yoreh De’ah and its commentaries by R. Judah Leib ben Issachar Dov Oppenheim. The title page identifies the primary commentators as the ammudim, as the Taz (R. David ben Samuel Ha-Levi, 1586–1667, author of Turei Zahav) and Shakh (R. Shabbetai ben Meir Ha-Kohen, 1621–1662, author of Siftei Kohen). It identifies R. Oppenheim as the pious av bet din and rosh mesivta in פפערדש and a nephew of the renowned R. David Oppenheim (Oppenheimer, 1664-1736). It is dated with the verse, “Then shall the offering of Judah [and Jerusalem] be pleasant to the Lord” (Malachi 3:4). The verso of the title page has an approbation from R. Samuel Hellman and below it an introduction from R. Simeon Wolff Oppenheim, the author’s son. The text follows, in two columns in rabbinic type. It encompasses Yoreh De’ah a through Y. D. 391. Decorative material includes a floral head-piece on the title page, and a decorative strip on the verso of the title page as well as another floral design.

Yonat Elem, a sermon from his epic in Kabbalah, Asarah Ma'amarot by R. Menahem Azariah of Fano (1548–1620), Italian rabbi and kabbalist. The scion of a wealthy family and a prolific author, he was a recognized authority on rabbinic law and the foremost exponent in the West of the kabbalistic system of R. Moses Cordovero. Under the influence of R. Israel Sarug, who during his stay in Italy spread the knowledge of the mystical system of R. Isaac Luria, R. Menahem Azariah became an admirer of the latter, though without departing from the system of R. Moses Cordovero. A pupil of R. Ishmael Hanina of Valmontone in Ferrara, he was active in Ferrara, Venice, Reggio, and Mantua. Together with his brothers he aided the victims of the earthquake of 1570. He was a patron of Jewish learning, contributing funds for the publication of such works as R. Cordovero's Pardes Rimmonim (Salonika, 1584) and R. Joseph Caro's commentary Kesef Mishneh (Venice, 1574–76) on Maimonides' Code.<p>Fano's fame as a talmudist is borne out by the collection of 130 responsa bearing his name which was published in 1600 in Venice and in 1788 in Dyhernfurth. His style of writing was precise and he displayed considerable originality in the views he expressed. He enjoyed great popularity as a teacher, attracting students from far and wide, from Germany as well as Italy. One of his disciples compared him to an angel of G-d in appearance. His gentleness and humility showed themselves in his refusal to answer adverse criticism leveled against him by a contemporary scholar on account of certain statements he made with regard to the ritual of the lulav on the festival of Tabernacles. Amadeo Recanati dedicated to him his Italian translation of Maimonides' Guide of the Perplexed; R. Isaiah Horowitz praised his theological treatise Yonat Elem (Amsterdam, 1648) saying of it, "the overwhelming majority of his words, and perhaps all of them, are true, and his Torah is true" (introduction to Novelot Hokhmah (Basle, 1631) by R. Joseph Delmedigo).

Seventeen of his works have been published. These include a summary of the legal decisions of R. Isaac Alfasi and his own major work on the Kabbalah, entitled Asarah Ma'amarot (only parts have been printed, Venice, 1597); Kanfei Yonah (Korzec, 1786), a kabbalistic work on prayer; and Gilgulei Neshamot (Prague, 1688) on the transmigration of the soul. Many of his kabbalistic interpretations must have been made for the first time in the course of sermons delivered by him. Extant in manuscript are liturgical poems, elegies, comments on the teachings of R. Isaac Luria, and a voluminous correspondence. He passed on in Mantua.