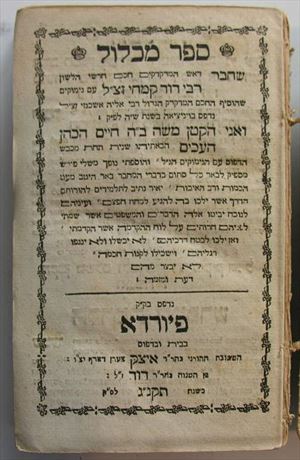 First edition of commentary by R. Moses b. Hayyim ha-Kohen Hoechheimer (c. 1750–1835), rabbi and Hebrew grammarian, known by his Hebrew pseudonym Hekhim. Born at Hoechheim (Franconia, Germany), R. Hoechheimer served as dayyan in Fuerth and in 1793 became rabbi of Ansbach where he remained until his death. He was in contact with such leading rabbinical authorities of his time as R. Ezekiel Landau of Prague and R. Meshullam Zalman b. Solomon of Fuerth, who quoted his opinions in their responsa. He wrote a textbook on Hebrew grammar, Safah Berurah (Fuerth, 1790) with tables of conjugations, and published David Kimhi's work Mikhlol, with annotations by Elijah Levita and a commentary by R. Hoechheimer himself (ibid., 1793). Many of his poems have been printed in Hebrew periodicals.

A complete grammatical guide to the Hebrew language. Mikhlol, written in two sections; the grammatical portion (Helek ha-Dikduk) which itself came to be known as the Mikhlol (Constantinople, 1532), and the lexicon (Helek ha-Inyan) known independently as the Sefer ha-Shorashim (before 1480). Radak's purpose in composing the Mikhlol was to provide a middle ground between the lengthy and detailed treatises of R. Jonah ibn Janah and R. Judah b. David Hayyuj and the extreme brevity and concision of R. Abraham ibn Ezra and the elder Kimhis. His chief contribution in grammar lies in the arrangement of the material and the popularization of the innovations of his father and brother. These include the division of the vowels into five long and five short, the treatment of the nifal as the passive of the kal, the recognition of the dagesh lene, etc. Seeing himself only as a "gleaner after the reapers," Radak nevertheless made some original contributions, including his distinguishing of the vav consecutive (vav ha-sherut) from the vav conjunctive and his concern for the continued development of the language through the recognition of the legitimacy of post-biblical forms. R. David Kimhi (known as Radak from the acronym of R abbi D avid K imhi; 1160?–1235?), grammarian and exegete of Narbonne, Provence. The son of R. Joseph Kimhi and brother and pupil of R. Moses Kimhi, R. David was a teacher in his native town and was active in public causes. He is known to have participated in the judgment (between 1205 and 1218) of several contentious persons from Barcelona who dishonored the memory of Rashi. During the Maimonidean controversy of 1232, he undertook a journey to Toledo to gain the support of R. Judah ibn Alfakhar for the Maimonideans. He was prevented from reaching his destination because of illness but his strong defense of Maimonides and the latter's followers together with Ibn Alfakhar's critique of Kimhi have been preserved in the correspondence between them (in Kovez Teshuvot ha-Rambam, Leipzig, 1859, pt. 3).