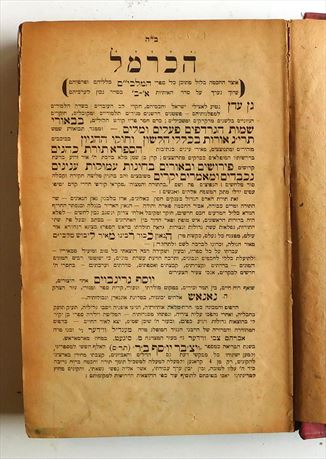 Word and phrase dictionary of the Malbim's works by R. Joseph b. Mordecai Gruenbaum (d. 1905) of Hajdunanas. R. Meir Loeb ben Jehiel Michael Malbim (1809–1879), rabbi, preacher, and biblical exegete. The name Malbim is an acronym formed from Meir Loeb ben Jehiel Michael. Born in Volochisk (Volhynia), Malbim was a child when his father died. He studied in his native town until the age of 13, with Moses Leib Horowitz, among others. He married at the age of 14, but after a short time divorced his wife. He went to Warsaw, where he became widely known as the "illui from Volhynia." From there he went to Leczyca, where he married the daughter of the local rabbi Hayyim Auerbach, who maintained him, and he was thus able to devote himself to literary work. In 1834 he traveled to Western Europe to obtain commendations from contemporary rabbis for his Arzot ha-Hayyim (1837), visiting, among other places, Pressburg, Amsterdam, and Breslau. In 1839, on the recommendation of Solomon Zalman Tiktin of Breslau, he was appointed rabbi of Wreschen (district of Posen), where he remained for seven years. From there he went to Kempen and was therefore sometimes referred to as "The Kempener." While in Kempen he was invited to the rabbinate of Satoraljaujhely in Hungary but refused the offer. He finally agreed to accept the call of the Bucharest community, and in the summer of 1858 he was officially inducted as chief rabbi of Rumania.

Because of Malbim's uncompromising stand against Reform, disputes broke out between him and the communal leaders of the town, leading to his imprisonment. He was freed only on the intervention of Sir Moses Montefiore and on condition that he leave Rumania and not return. M. Rosen has published various documents which disclose the false accusations and calumnies Malbim’s Jewish-assimilationist enemies wrote against him to the Rumanian government. They accused him of disloyalty and of impeding social assimilation between Jews and non-Jews by insisting on adherence to the dietary laws, and said, "this rabbi by his conduct and prohibitions wishes to impede our progress." As a result of this the prime minister of Rumania issued a proclamation against the "ignorant and insolent" rabbi for his effrontery in "publishing libelous letters against those eating meat from any butcher shop and he has preached against the idea of progress and freedom." In consequence the minister refused to grant rights to the Jews of Bucharest, on the grounds that the rabbi of the community was "the sworn enemy of progress" (from the official newspaper Moniturul March 6, 1864). Determined to refute the false accusations made against him, Malbim went to Constantinople to lodge a complaint against the Rumanian government, which was then under Turkish domination. Following the rejection of his appeal and his failure to obtain the help of the Alliance IsraMlite Universelle (in transmitting a memorandum written in 1864 in Paris in which Malbim, with the help of Adolphe CrMmieux, addressed himself to the Rumanian ruler, stressing his patriotism), he was compelled to leave Rumania (1864). During his wanderings in the following years he suffered persecution and calumny. He served as rabbi intermittently in Leczyca, Kherson, and Mogilev and was persecuted by the assimilationists, the maskilim, and the Hasidim. He was invited to Mainz, and on his way stopped at Koenigsberg, where he remained for about four years. In 1879 he received an invitation from Kremenchug, Poltava oblast, to serve as its rabbi, but died in Kiev on his way there. Malbim's fame and his immense popularity rest upon his commentary on the Bible, which was widely esteemed. Malbim's commentary on the Bible was motivated by his opposition to the Reform movement, which in his view could potentially undermine the very foundation of Judaism. He wished to strengthen the position of Orthodox Judaism in the spheres of exegesis, knowledge of Hebrew, and the exposition of the Bible according to its plain meaning, and thereby counteract and weaken the Reformers in precisely those three spheres, in which they had made appreciable achievements. In his long introduction to the commentary Ha-Torah ve-ha-Mitzvah (1860) on the Book of Leviticus and the Sifra, Malbim refers to the Reform Synod at Brunswick in 1844 calling it a gathering of "rabbis and preachers as well as readers who butcher their communities." Because of these Reformers' negative approach Malbim decided that "it was time to act for the Lord, and to fortify the wall around the Law, Written and Oral... so that violators could not assail and desecrate it." From that time he began to compose commentaries on the Bible with the aim of proving "that the Oral Law is the law given from heaven, and that all its words are necessary and implicit in the plain meaning of the verse and in the profundity of the language, and that the interpretation is only the plain meaning based upon accurate, linguistic rules." His commentary to the Bible is based upon three fixed principles: in the text of the Torah and the figurative language of the prophets there are no repetitions of mere synonyms; consequently every word in a sentence is essential to the meaning in accord with the rules of the language despite the fact that they seem to be mere synonymous repetitions. Every statement conveys a sublime thought: all the metaphors are of importance and replete with wisdom for they are the words of the living G-d (introduction to Isaiah).