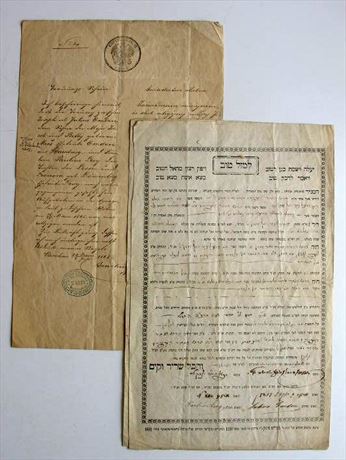 Includes related document in Latin and Polish signed by the rabbi.

Engagement contract signed by R. Dov Ber b. Isaac Meisels (1798–1870), rabbi of Warsaw. Scion of one of the most ancient families of Cracow, he was a descendant of R. Moses Isserles. He studied under his father, who was rabbi of Kamenets-Podolsk, Ukraine. After his marriage to the daughter of the wealthy Solomon Borenstein, he settled in Cracow, where he opened a bank in partnership with Horowitz, the bank bearing the names of both partners. In 1832, after a difficult struggle against R. Saul Landa, R. Meisels was elected rabbi of the town. R. Saul Landa and his followers did not recognize this election and they established their own bet din. The divergences of opinion between the two battei din were tremendous; what one of them permitted the other prohibited. Both rabbis vigorously fought the emergence of the Haskalah in Cracow and they were violently attacked by the maskilim in the pages of their Algemeyne Tsaytung. During the period of his rabbinate in Cracow, and even before then, Meisels played a central role in the communal life of the Jews of Cracow. Being extremely wealthy, he distributed the whole of his rabbinical salary to charitable institutions, thus gaining the esteem of the masses. Many of the inhabitants of Cracow, which was then under Austrian rule, joined the Polish Revolt which broke out in Warsaw in 1830 against Russian rule. R. Meisels supported the rebels and he personally financed the purchase of arms and the expenses of the rebels.

During the revolution of 1844, R. Meisels again supported the rebels. At a central prayer service held in the synagogue, R. Meisels called upon the congregation to join the rebels and to support them, even taking part in mass demonstrations in the street. In 1846 he was elected to the Senate of the Cracow Republic (the Free City of Cracow) and in 1848 was a member of the Polish delegation to the Austrian emperor which appealed for the liberation of the political prisoners. In the elections to the Austrian parliament which were held on December 31, 1848, R. Meisels was elected as the first Jew, obtaining a large majority over the other Jewish candidates. During the same year, he was also elected as one of the 40 councilors of the municipality of Cracow. In 1851, R. Meisels lent his assistance to projects for Jewish agricultural settlement, but these did not materialize. In parliament, R. Meisels joined forces with the Radicals. His sharp reply of: "Juden haben keine Rechte" – "Jews have no Right(s)" – to the speaker of parliament who had asked him why he sat with the Leftists has become renowned. In 1854 his great rival, R. Saul Landa, died and two years later, R. Meisels became chief rabbi of Warsaw. He was received with much enthusiasm by all circles, though his election followed upon a violent dispute.

In November 1861, he was arrested for closing the synagogue of Warsaw in defiance of the czarist authorities and was compelled to leave the town after a lengthy imprisonment. London and Amsterdam offered him their rabbinical seats, but in 1862 he was authorized to return to Warsaw, which he preferred. He was again expelled and deported to Cracow, but he was pardoned and returned to Warsaw – but from then he engaged exclusively in study. When he died in Warsaw, the whole population attended the funeral, as a manifestation of the desire for Polish independence; the Russians prohibited the publication of obituaries on him, in revenge for his political activities against them. R. Meisels published Hiddushei Maharadam (Warsaw, 1870), consisting of novellae on the Sefer ha-Mitzvot of Maimonides.