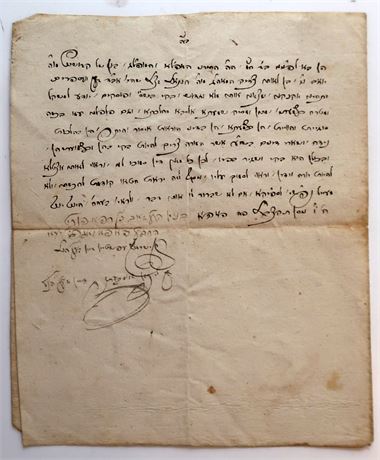 Certificate of dayyan (rabbinical authority to judge) signed by R. Benjamin Ze'ev Wolf haKohen Rapaport (1754–1837), rabbi of Pupa, Hungary. His father R.  Isaac and his grandfather came from Fuerth in Germany to Nikolsburg, where Benjamin was born. In 1771 R. Rapoport went, as was the custom with many Moravians, to nearby Hungary in order to evade the ban on Jewish marriages of other than the eldest son in force at the time in Moravia. He settled in Obuda (now part of Budapest) and married the daughter of David Boskovitz, one of the leaders of the community. He lived with his father-in-law for ten years, engaging in studying and teaching. In 1781 he was appointed rabbi of the community of Papa in Hungary, where he served for 56 years until his passing. This community, founded in 1749, made considerable progress during the period of his office. A dispute, which exercised Jewish communities in Central Europe for many years, also developed between him and R. Moses Sofer with regard to R. Jonathan Alexandersohn, rabbi of Hej^csaba in Hungary. Like R. Schwerin-Goetz, R. Rapoport supported the attacked Alexandersohn, while R. Moses Sofer was opposed to him, even invoking the secular government, but his community supported him.

R. Rapoport, apparently studied with his grandfather R. Baruch Kahana Rapaport. He was an erudite rabbinic scholar and received his appointment to the rabbinate of Pupa in his twenties! He published his first work in his twenties, Simlat Binyamin u-Vigdei Kehunnah (Dyhrenfurth, 1788) on the Shulhan Arukh Yoreh De'ah. R. Rapaport left a number of works in manuscript, some of which were published after his passing, among them Edut le-Yisrael on tractate Makkot with additions by his son (Pressburg, 1839). It constitutes the third part of his Masat Binyamin. His much sought after approbation appears in many period works.