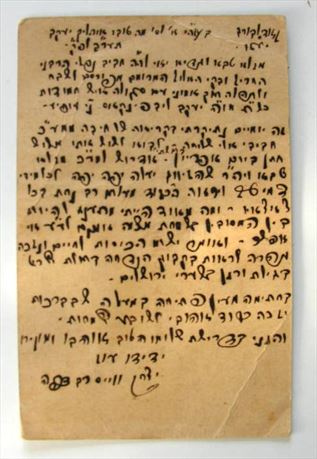 Letter by R. Isaac b. Isaiah Issachar Beer Weiss (1877-1942), Rabbi of Verbo. He was born in Pressburg and studies at the Yeshiva of the Shevet Sofer. At a young age he was appointed a Dayan in Pressburg. In 1903 (1906?) he was appointed Rabbi of Kadlburg (Oroszwar), followed by Verbo in 1916, where he served till his untimely death by the accursed Nazis in 1942.  An erudite Talmudic scholar he authored many halakhic and historic works including the resposa Siah Yitzhok, (multiple volumes)and a history of the Pressburg rabbinate, Avnei Bet haYotzer. R. Weiss perished in the Holocaust near Lublin.