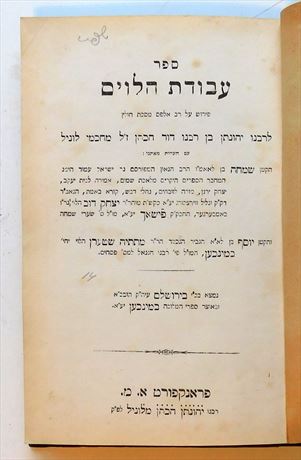 Only edition of this commentary on the Alfasi  on tractate Hullin by R. Jonathon ben David ha-Kohen of Lunel with the annotations of R. Simhah ben Isaac Dov ha-Levi Bamberger and R. Joseph be Matasyah Stern. The title-page is dated Rabbenu Jonathon of Lunel יהונתן הכהן מלוניל (631 = 1871) and informs that is based on a manuscript found oin Jerusalem and in the library in Munchen. There is an approbation from R. Jacob Ettlinger followed by introductions and then the text, which consists of the Alfasi at the top of the page in square letters and the annotations below in rabbinic type.

R. Isaac ben Jacob Alfasi (Rif; 1013–1103) was the author of the most important code prior to the Mishneh Torah of Maimonides. In a sense, Alfasi brought the geonic period to a close. The last of the Babylonian geonim, Hai Gaon, died when Alfasi was 25 years old. Alfasi himself was called "gaon" by several early halakhic authorities. R. Judah b. Barzillai al-Bargeloni sometimes refers to him simply as "the Gaon."  To a certain extent Alfasi models himself on the Halakhot Gedolot, but Alfasi's book is much superior. The halakhic material is three or four times that in the Halakhot Gedolot; the aggadic material is even more. Alfasi exercises greater freedom in the handling of his material, and in the placement of certain discussions, often assembling into one place statements dealing with a specific subject but scattered throughout the Talmud. For example, he assembles all discussions on the scope and definition of censure and reproof at the end of chapter two of tractate Shabbat. Similarly, he arranges the discussions of the Gemara relevant to many Mishnayot. He first quotes the discussions which bear directly on the Mishnah, then those which have a loose bearing on it, and finally those which have some association with it in terms of subject matter. Alfasi cites all the material from the Talmud necessary to establish the argument for each law and for every opinion. Jewish scholars of later generations were unstinting in their admiration of Alfasi and his book. Maimonides wrote "The Halakhot of the great rabbi, our teacher Isaac, of blessed memory, has superseded all these works (geonic codes)…for it contains all the decisions and laws which we need in our day… and, except for a few halakhot, not exceeding ten, his decisions are unassailable."