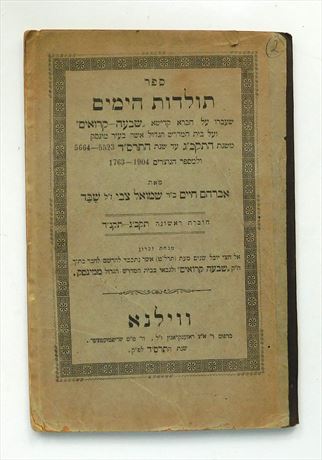 First edition of the chronicle and register of the Hevrah Kaddishah Shiv‘ah Keru'im. The title page states that it is the record of that organization and of the Bet Midrash ha-Gadol in Minsk from the years 5523-5564 (1763-1904) by Abraham Hayyim ben Samuel Zevi Shabad. It is a half jubilee volume from 1879 from the time that he was honored to be inscribed among the Shiv‘ah Keru'im and gabbai of the Bet Midrash ha-Gadol in Minsk. There is publication information in Cyrillic at the bottom of the page. There is an introduction from Shabad in which he describes the pinkasim of the Hevrah Kaddishah and his work with them. The text of Toldot ha-Yamim, in a single column in square letters, is a history of the organization, Bet Midrash, and associated occurrences. At the end of Toldot ha-Yamim is a list of the members of the Shiv‘ah Keru'im from 1763 through 1793 and their duties.

Hevrah Kaddishah (holy brotherhood) is a burial society. The term originally had other wider meanings but, it came, in the course of time, at least among the Ashkenazi Jews, to apply to a brotherhood formed for one purpose only, namely, the reverential disposal of the dead in accordance with Jewish law and tradition. The origin of this restricted use of the term can be found in a passage of the Talmud. The duty of arranging for the disposal of the dead devolved upon the entire community and when a person died the whole population had to abstain from work in order to pay their respects (cf. Jos. Apion 2.27: "All who pass by when one is buried must accompany the funeral"). On one occasion, R. Hamnuna (d. 320) came to a certain place and heard the sound of a funerary bugle. When he saw that the members of the community continued with their avocations he said, "Let them be placed under a ban." They informed him, however, that there was a havurah which occupied itself with this duty, and he permitted the others to continue their work (MK 27b). Another interesting but less certain reference is found in the minor tractate Semahot (chap. 12): "Thus used the havurot to conduct themselves in Jerusalem. Some used to go to the house of mourning, and others to banqueting houses; some to the shevu'a ha-ben (see Circumcision, Folklore), and others to gather up human bones.... the early Hasidim gave preference to the house of mourning over the banqueting houses."

Hevra kaddisha in the more restricted sense arose simultaneously in Spain and in Germany at the beginning of the 14th century, and soon was to be found in all communities. It would appear that originally the privileges were confined to the actual members of the hevra. The comment of Rashi to the above-mentioned passage from Mo'ed Katan, "there were associations, each one of which made itself responsible for the burial of its own members" (cf. Tos. Ket. 17a bottom), no doubt reflects local and contemporary conditions.

The origin of the hevra kaddisha in the sense of a brotherhood which took upon itself the sacred duty of providing for the burial of all members of the community is not known before the 16th century. The first known was established by Eleazar Ashkenazi in Prague in 1564, and the drawing up of the formal takkanot, the regulations of the hevra, was effected by Judah Loew b. Bezalel, also of Prague, in the 17th century. These takkanot, which were confirmed by the Austrian government, laid it down inter alia that its services were available to all members of the community even if they were not members of the hevra and made no contribution toward it. They regulated such matters as the fees to be paid, the allocation of the graves, and the rules for the erection of tombstones.