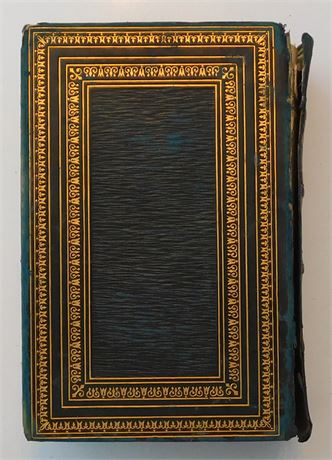 Title: The Daily Prayers ... according to the custom of the German and Polish Jews. With a new translation by the Rev. A[braham]. P[ererira]. Mendes. To which are added laws, ... relating to the sacred rites and ceremonies of the Jewish religion, selected from the compilation of the ... Chief Rabbi of Lissa.

R. Abraham Perira Mendes (February 9, 1825, Kingston, Jamaica – April 18, 1893, New York), English rabbi and educator. He was the first master of the Beth Limud School of Kingston, but resigned in order to prepare in London, England for the vocation of preacher and rabbi. He studied under Dr. Meldola, the dayyan, and the Rev. D. A. de Sola, "the learned Hazzan" of the Sephardic community, and received his diplomas. He returned to Jamaica and became for a short time assistant to the Rev. Isaac Lopez, minister of the Kingston Sephardic congregation, but was soon called from that position to be the minister of the Montego Bay community. There he stayed until his wife's failing health compelled him, in 1851, to return to her milder native climate. Mendes was then elected minister and preacher in the Birmingham (Eng.) congregation, and remained there until 1858, when he moved to London, became head of the Neveh Zedek for six years, and established Northwick College, a school for Jewish youth. He continued meanwhile his ministerial duties and literary labors, and on the death of Haham Artom acted as preacher and dayyan for the Sephardic community of London. He was called to the ministry in the Newport (Rhode Island) congregation by the guardian Congregation Shearith Israel of New York in 1883, and continued its minister until his death ten years later.

He was the first among the Sephardim to publish a volume of sermons in English (1855). He translated the Daily Prayer-Book of the German Jews (Valentine's edition), and finished the translation of the Festival and Holy Day Books left incomplete by the death of Rev. D. A. de Sola. He published, besides, The Law of Moses, Post-Biblical History of the Jews (to fall of Jerusalem), Interlineary Translation of the Prayer-Book (German), and the Haggadah. He married Eliza, a daughter of Rev. D. A. de Sola of London.