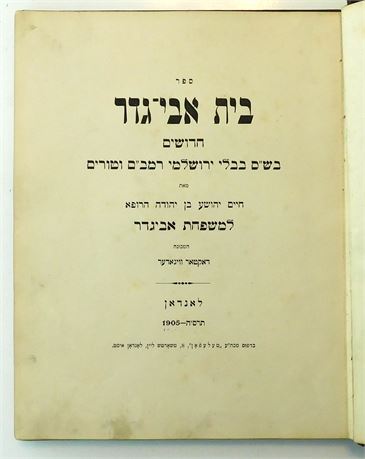 Added t.p.: "Beth Abigdor"; novellae on different treatises of the Talmuds ... also casuistic essays on the Ram-bam and Turim, by Dr. George S. Wigoder of Dublin...

Only edition of these novellae on both the Talmud Bavli and Talmud Yerusahalmi, as well as the Rambam and Tur by R. Dr. Hayyim Joshua ben Judah (George S.) Wigoder. There are two Hebrew title-pages, the second describing Bet Avi-Geder as part one, that for the Talmudic novellae. Part two, after 63 ff, is additional novellae and on the Shulhan Arukh and Rambmam. An English title-page describes Beth Abigdor novellae on Different treatises of the Babli and Jerushalmi, also caustic essays on Tam-bam and Turim. Bet Avi-Geder is dedicated to Robert Bradlaw, the author’s father-in-law. Next are approbations from R. Elijah Baruch Kamai, R. Solomon Mordecai Brodna, R. Mordecai Kapolowitz, R. Isaac Meir Joselsohn, and R. Aaron Leib Glickman, followed by R. Wigoder’s introduction and then the text, primarily novellae on the Talmud.  A multi-faceted attractive work

Dr. Selig George Wigoder was born in the town of Wegoda, near Wexna, Lithuania, in 1865. He studied firstly Philosophy and then Medicine in Halle, Germany and later Medicine in Edinburgh. He joined his brother Myer Joel Wigoder who had emigrated to Dublin, Ireland. On August 7th, 1895, he married Jessie Bradlaw, in the Adelaide Road Synagogue in Dublin. Selig and Jessie had a son, Lionel, born on the first day of the month of Ab, but Selig was actually away in Edinburgh, studying for his final medical examination. He returned to Dublin two days later as a qualified medical doctor who could practice in Dublin. As well as becoming a prominent doctor in Dublin, Selig was a prolific author in Hebrew (as was his brother Myer Joel Wigoder). His works included Keter Torah, dedicated to his late mother-in-law, and Beth Avigdor, dedicated to his late father-in-law. He died on 27th May, 1934, and was buried in Dublin.