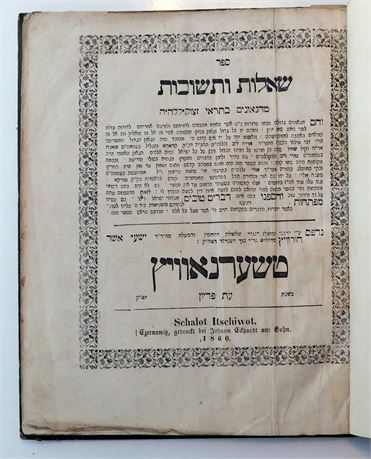 R. Aryeh Leib ben Samuel Ẓevi Hirsch (1640–1718) was a Polish rabbi. He was was the grandson of R. Joel Sirkes. R. Aryeh Leib studied under his stepfather R. David ha-Levi, author of the Turei Zahav, and later under Joshua Hoeschel of Cracow. At the age of 23, he was appointed rabbi of Zwierz (in the district of Lemberg) and five years later of Kamorna. In 1666 his stepfather sent him and his stepbrother R. Isaiah ha-Levi to Constantinople to Shabbetai Ẓevi, who welcomed them and expressed his concern over the persecution of the Jews in 1648–51. Later he was rabbi of Stopnica (1677–78), Zamość (1682), Tiktin (1689), Cracow (1695), and Brest-Litovsk (1701–18). His responsa, entitled Sha'agat Aryeh, were published by his grandson R. Abraham Nathan Neta Meisels, who added his own responsa under the title of Kol Shaḥal (Neuwied, 1736; Salonika, 1746). R. Aryeh Leib also prepared a collection of his grandfather's responsa for publication. However, the work, She'elot u-Teshuvot Ge'onei Batrai(first edition Turka, 1764) only after his death. In several responsa Aryeh Leib states that his halakhic decision is to be applied in practice subject to the agreement of his stepfather R. David ha-Levi, whose comment on these responsa was: "My stepson has determined the halakhah exactly."