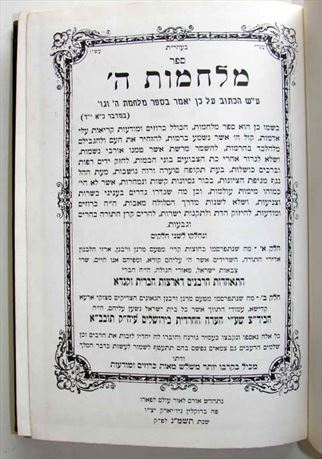 Unusual, fascinating, and rare collection of pashkevils (polemical wall posters, broadsides) collected by R. Joseph Saks. The collection contains well over three hundred such posters on a wide variety of subjects. The title page begins with the subtitle “Therefore it is said in the Book of the Wars of the Lord (Milhamot HaShem)”  (Numbers 21:14). It informs that as is its name, it is a book of wars, including announcements and proclamations, warning the people and setting limits so as not to become entangled in bans, to avoid the nets that ambush the soul, noting the plague of Zionism, and much more. There is introductory material followed by a listing of the pashkevils. There numerous calls to prayer for various evils and calamities besetting the populace and to strengthen religion, as well as warnings against such entrapments of modern life as universities, football, against women going into the army, acdepting tax money (state) for education.  On a Reform Temple in Jerusalem, and much much more.

Pashkevils – wall posters – are a key form of communication in Haredi society and are used to convey a wide range of messages. The collection of pashkevils from the Meah Shearim neighborhood of Jerusalem includes items dating back to the nineteenth century, but well into the twenty-first century, this tool is continuing to develop and maintain its dynamic character. The collection offers a unique and comprehensive view of Haredi society in the pre-state period and since independence, providing insight into a world that remains largely hidden from the Israeli general public. The messages conveyed in the pashkevils are highly sophisticated, drawing on the internal codes of Haredi society and colored by allusions to the rich world of associations of traditional Jewish literature. The pashkevils address issues that have been a source of constant concern for Haredi society in the Land of Israel for three centuries, above all – how to maintain its distinct tradition, values, and education system. The collection also highlights the changes that have occurred in this struggle due to the challenges posed by technological process, transitions within Haredi society itself, and developments in surrounding Israeli society and culture.