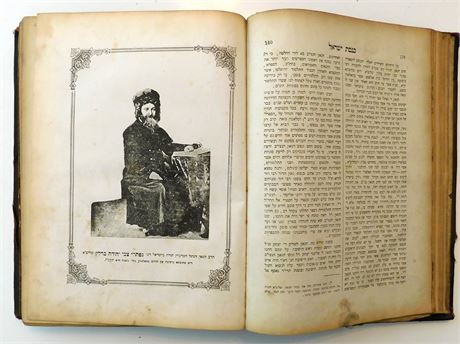 Only edition of this diverse publication consisting of articles, many illustrated, by R. Saul Phinehas Rabbinowitz. The title-page lists the numerous subject matter addressed, for example the literary section includes eight parts 1) bina be-Mikra, Talmud, aggada, and midrashim; 2) chapters in divrei ha-yamim; 6) toldos anshei ha-shem from the previous and present generations; and 8) verse, parables, and trope. The second part, helek ha-shemushe, that is, usedful, also of eight parts, encompasses 3) useful business information; 6) medical and other health information; 7) accounting and information concerning communal affairs. There are sections of tales, poetry, and even one of obituaries. Several of the articles are  accompanied by photographs of both rabbinic and secular figures, such as Professor Dr. H. Graetz, R. Zechariah Frankel, and R. Jacob of Vilna. A varied and fascinating collection of articles,

R. Saul Phinehas Rabbinowitz (SHePHer, 1845–1910), East European Hebrew writer and historian. R. Rabbinowitz, who was born in Tavrogi, Lithuania, to a family of rabbis, received semikhah from R. Israel Salanter (Lipkin), while also becoming interested in Haskalah and teaching himself German and Russian. R. Rabbinowitz first worked as a private tutor in Vilna and other Lithuanian towns before settling in Warsaw in 1875 where he wrote for the Hebrew press. During this period he inclined toward socialist cosmopolitanism, which brought him into contact with A.S. Liebermann 's circle of Jewish Socialists. In 1881 Rabbinowitz was among those who reported on the Russian pogroms to Western Jewry. He accompanied S. Mohilever to Brody, where they organized help for the refugees; he also took part in the St. Petersburg Conference of Notables (1882), calling for mass emigration from Russia. At first, R. Rabbinowitz advocated emigration to the U.S. but he soon joined Ḥovevei Zion, became secretary of the important Warsaw branch, and attended the Kattowitz Conference (1884). During 1886–88 he published the annual Keneset Yisrael, an organ for national revival and Ḥibbat Zion, and published documents on the history of Russian-Polish Jewry in a supplement (Orot me-Ofel). In 1890 he was among the founders of the Warsaw office of Aḥad Ha-Am's order Benei Moshe and tried to defend the interests of religious tradition within its ranks. In 1891 he joined an abortive Ḥovevei Zion mission to the West. A member of the Zionist movement, R. Rabbinowitz attended the first Zionist Congresses, although he criticized aspects of the movement in Al Ẓiyyon ve-al Mikra'eha (1898).

R. Rabbinowitz's great scholarly achievement was his Hebrew translation of H. Graetz's History of the Jews (1890–99), in which the author had given him a free hand. R. Rabbinowitz introduced many changes in the text, also omitting passages that might offend the Orthodox and the Russian censors. The translation includes his own notes and those of A. Harkavy and other scholars. R. Rabbinowitz's work, which was in fact a new "Graetz," had a tremendous impact on Eastern Jewry, despite its meliẓah style, and was reprinted in many editions. Other writings by R. Rabbinowitz include biographies of L. Zunz (1896), R. Z. Frankel (1898), and R. Joseph (Joselman) of Rosheim (1902), and a study on the Jews expelled from Spain, published on the 400 anniversary of the Expulsion (Moẓe'ei Golah, 1894). He contributed articles to the newly founded (1896) Hebrew periodical Ha-Shilo'aḥ, participated in the early Eshkol Hebrew encyclopedia (1888), and completed S.J. Fuenn 's Hebrew dictionary Ha-Oẓar (1900–03).

Beset by poverty and family misfortunes, and having suffered great hardship during and after the 1905 revolution, R. Rabbinowitz left Russia for Frankfurt where, however, he found little recognition and had to live on charity. His proposed three-volume modern Jewish history did not advance beyond the publication of a few chapters. His biography was written by his son-in-law, the historian J. Meisl.