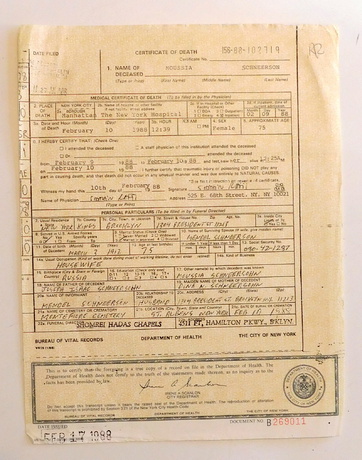 An official Death Certificate of Rebbitzen Chaya Mushka (Moussia) Schneerson, dated Feb 17 1988, (March 16, 1901 – February 10, 1988), referred to by Lubavitchers as The Rebbetzin, was the wife of R. Menachem Mendel Schneerson, the seventh and last Rebbe (spiritual leader) of the Chabad-Lubavitch branch of Hasidic Judaism. She was the second of three daughters of the sixth Lubavitcher Rebbe, R. Yosef Yitzchok Schneersohn. She was named after the wife of the third Lubavitcher Rebbe, R. Menachem Mendel Schneerson.

Apparently the initial copy of the original certificate, which is kept permanently in the City of New York, Buearu of Vital Statistics. Only copies of the original are issued to family members and selected others upon application.