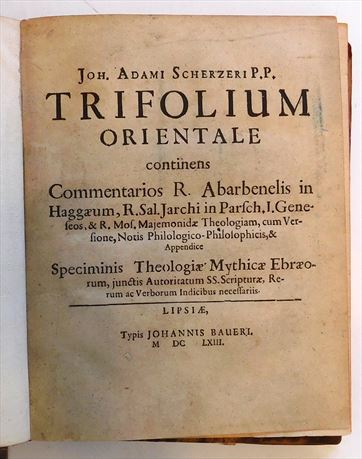 Don Isaac b. Judah Abravanel (1437-1508), received a careful education and was a pupil of R. Joseph Hayyim, rabbi of Lisbon. Well versed in Talmudic literature and in the learning of his time, endowed with a clear and keen mind, and full of enthusiasm for Judaism, he devoted his early years to the study of Jewish religious philosophy,and when scarcely twenty years old wrote on the original form of the natural elements, on the most vital religious questions, on prophecy, etc. His political abilities also attracted attention while he was still young. He entered the service of King Alfonso V. of Portugal as treasurer, and soon won the confidence of his master. Notwithstanding his high position and the great wealth he had inherited from his father, his love for his afflicted brethren was unabated. When Arzilla, in Morocco, was taken by the Moors, and the Jewish captives were sold as slaves, he contributed largely to the funds needed to manumit them, and personally arranged for collections throughout Portugal. He also wrote to his learned and wealthy friend Jehiel, of Pisa, in behalf of the captives. After the death of Alfonso he was obliged to relinquish his office, having been accused by King John II. of connivance with the duke of Bragança, who had been executed on the charge of conspiracy. Don Isaac, warned in time, saved himself by a hasty flight to Castile (1483). His large fortune was confiscated by royal decree. At Toledo, his new home, he occupied himself at first with Biblical studies, and in the course of six months produced an extensive commentary on the books of Joshua, Judges, and Samuel. But shortly afterward he entered the service of the house of Castile. Together with his friend, the influential Don Abraham Senior, of Segovia, he undertook to farm the revenues and to supply provisions for the royal army, contracts that he carried out to the entire satisfaction of Queen Isabella. During the Moorish war Abravanel advanced considerable sums of money to the government. When the banishment of the Jews from Spain was decreed, he left nothing undone to induce the king to revoke the edict. In vain did he offer him 30,000 ducats ($68,400, nominal value). With his brethren in faith he left Spain and went to Naples, where, soon after, he entered the service of the king. For a short time he lived in peace undisturbed; but when the city was taken by the French, bereft of all his possessions, he followed the young king, Ferdinand, in 1495, to Messina; then went to Corfu; and in 1496 settled in Monopoli, and lastly (1503) in Venice, where his services were employed in negotiating a commercial treaty between Portugal and the Venetian republic (Zurita, "Historia del Rey Don Fernando el Católico," v. 342a).

R. Shlomo ben Yitzhak (1040-1105), Rashi was the outstanding Biblical commentator of the Middle Ages. He was born in Troyes, France, and lived from 1040 to 1105, surviving the massacres of the First Crusade through Europe. He was a fantastic scholar and studied with the greatest student of Rabbenu Gershom of Mainz At twenty-five, he founded his own academy in France. Rashi's commentary on the Bible was unique. His concern was for every word in the text which need elaboration or explanation. Moreover, he used the fewest words possible in his commentaries. Most of his explanations were not written by him. Apparently, students would ask him questions about the text, or he would rhetorically ask questions about specific words, and a student would write his short, lucid answers in the margin of the parchment text. These answers comprise Rashi's commentary. We now have the answers, but the trick to studying Rashi is to figure out what the problem was with the text or the grammar of a given word. Besides explaining individual words, Rashi also made use of the the great oceans of midrash. However, instead of just quoting the early rabbis, Rashi applied the stories specifically to the Bible text; often abridging them. He assumed that his students knew the midrash; he just emphasized its immediate relevance to the TaNaCH. Rashi is also important for students of French. Many words in the Bible were unknown to Rashi's students, and obviously there would ask what a particular word meant and Rashi would give the answer in Old French using Hebrew transliteration. These transliterations provide important insights into the development of French and its pronunciation. The original printed Bible text by Daniel Bomberg in 1517 included Rashi's commentary. That commentary became so popular that there are now more than 200 commentaries on his commentary. It is assumed in traditional circles that when you read the TaNaCh, you also read Rashi. Rashi's commentary on the Talmud was even more important than his TaNaCh commentary. The Talmud was written in legalese: terse, unexplained language with no punctuation. Rashi provided a simple explanation of all Gemarra discussions. He explained all of the terse phrases; he explained the principles and concepts assumed by the sages who put together the Gemarra. His simple, brief explanations for practically every phrase of the Gemara made the Talmud understandable to the non-scholar. It became an instant best seller, and, to this day, it is unthinkable to study Talmud without studying Rashi's commentary at the same time.

R. Moses ben Maimon (Maimonides, Rambam).was a medieval Sephardic Jewish philosopher who became one of the most prolific and influential Torah scholars of the Middle Ages. In his time, he was also a preeminent astronomer and physician. Born in Córdoba, Almoravid empire (present-day Spain) on Passover Eve, 1135 or 1138,he worked as a rabbi, physician, and philosopher in Morocco and Egypt. He died in Egypt on December 12, 1204, whence his body was taken to the lower Galilee and buried in Tiberias. During his lifetime, most Jews greeted Maimonides' writings on Jewish law and ethics with acclaim and gratitude, even as far away as Iraq and Yemen. Yet, while Maimonides rose to become the revered head of the Jewish community in Egypt, his writings also had vociferous critics, particularly in Spain. Nonetheless, he was posthumously acknowledged as among the foremost rabbinical decisors and philosophers in Jewish history, and his copious work comprises a cornerstone of Jewish scholarship. His fourteen-volume Mishneh Torah still carries significant canonical authority as a codification of Talmudic law. He is sometimes known as "ha Nesher ha Gadol" (the great eagle) in recognition of his outstanding status as a bona fide exponent of the Oral Torah. Aside from being revered by Jewish historians, Maimonides also figures very prominently in the history of Islamic and Arab sciences and is mentioned extensively in studies. Influenced by Al-Farabi, Avicenna, and his contemporary Averroes, he in his turn influenced other prominent Arab and Muslim philosophers and scientists. He became a prominent philosopher and polymath in both the Jewish and Islamic worlds.