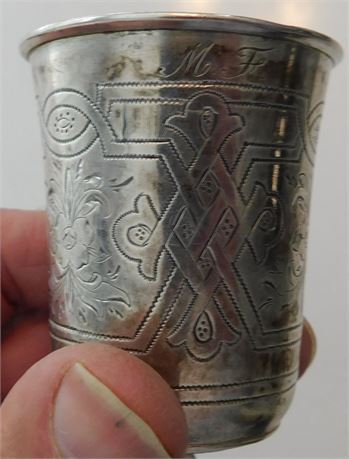 Silver kiddush club of R. Moses Feinstein (1895–1986), rabbi and leader of American Orthodoxy. R. Feinstein was born in Uzda, near Minsk, Belorussia, where his father, from whom he received his early education, was rabbi. In 1921 he became rabbi of Luban, near Minsk, where he served until he emigrated to the United States in 1937. There R. Feinstein was appointed rosh yeshivah of New York's Metivta Tiferet Jerusalem. Under his guidance, it became one of the leading American yeshivot. R. Feinstein became one of the leading halakhic authorities of the time, and his rulings were accepted as authoritative by Orthodox Jews throughout the world. His decisions covered many areas of modern science and technology in the light of halakhah. They also dealt with problems connected with Jewish life under Communist rule and in the United States. R. Feinstein's responsa are entitled Iggerot Moshe, and follow the Shulhan Arukh: Orah Hayyim (1959), Yoreh De'ah (1959), Even ha-Ezer (1961), and Hoshen Mishpat (1963). He also published his talmudic novellae to Bava Kamma in two volumes (1946, 1953) and to Bava Mezia (1966). R. Feinstein, highly regarded for his dedication and selflessness, was elected to positions of importance in the Orthodox Jewish world. He was president of the Union of Orthodox Rabbis and chairman of the American branch of the Mo'ezet Gedolei ha-Torah of Agudat Israel. He was also active in guiding and obtaining support for Orthodox Israel educational institutions, particularly the Hinnukh Azma'i school system of Agudat Israel.