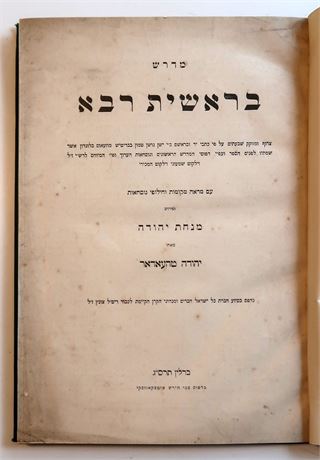 Only edition of this work with the text and commentary of R. Julius Theodor (1849-1923) Bereshit Rabbah. The text is accompanied by extensive notes and a comprehensive commentary, Minḥat Yehudah by R. Theodor. It is based upon manuscripts and first editions with variant readings and the commentary. There is a forward in German and then the text with notes and commentary.

R. Julius Theodor (1849–1923) was a rabbi and researcher of the aggadah and Midrash. Theodor, born in Schalleninken, E. Prussia, studied at Breslau Rabbinical Seminary under Z. Frankel and H. Graetz. After teaching religion in Tarnowitz and Bromberg (Bydgoszcz), he served as rabbi in Brant and in Bojanowo (1888–1919). He was active in communal life and rabbinical organizations, following a traditional line. After World War I he moved to Berlin. His scholarly work was devoted almost entirely to research in the aggadah, in which field he published articles in Hebrew and German. His life work was the publication of the Midrash Bereshit Rabbah in a scholarly edition entitled Minḥat Yehudah, Theodor did not succeed in preparing the entire Midrash, but more than half was published during his lifetime (1903–17); the remainder of his literary estate was published in 1926 by Ḥ. Albeck, who also published the last part of the Midrash with a comprehensive introduction (1928–36). Theodor had the distinction of being the first to publish a text of rabbinic literature in a scientific and amended edition in accordance with the philological methods then current. This edition, in which both his talmudic scholarship and classical philological knowledge found expression, serves as an instructive example of accuracy and care and is a most important contribution to the study of the aggadah.