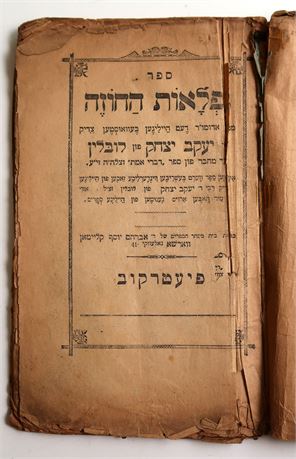 Stories and sayings in Yiddish of the Hasidic master, R. Jacob Isaac Horowitz, known as The Seer of Lublin"‎‎, ha-Chozeh MiLublin; (c. 1745 - August 15, 1815). A leading figure in the early Hasidic movement, he became known as the "seer" or "visionary" due to his purported ability to gaze across great distance by supernatural means. He was a disciple of the Maggid of Mezritch. He continued his studies under R. Shmelke of Nilkolsburg and R. Elimelech of Lizhensk. He lived for a while in Lantzut before moving to Lublin.

After R. Yaakov Yitzchak moved to Lublin, thousands of Hasidim flocked to learn from him. Among his disciples were such Hasidic luminaries as the Yid Hakodesh ("The Holy Jew"), R. Simcha Bunim of Peshischa, R. Meir of Apta, R. David of Lelov, the Yismach Moshe, R. Tzvi Elimelech of Dinov, R. Naftali Zvi of Ropshitz, the Ma'or Vashemesh, and Sar Shalom of Belz. The Seer of Lublin also gained a reputation as a miracle-worker who could accomplish the tikkun, or repair of the soul, of those who sought his assistance and guidance. During his stay in Lublin, R. Yaakov Yitzchak was opposed by a prominent rabbi, R. Ezriel Horowitz.

He was a descendant of the Shelah ha-Kadosh (Hebrew: של"ה הקדוש), a prominent Levite rabbi and mystic, and his maternal grandfather, R. Yaakov Koppel Likover, also a prominent rabbi, a scholar, and a contemporary of the Ba'al Shem Tov. He was injured in a fall from a window on Simchat Torah, and died almost a year later on Tisha B'av from injuries relating to this fall. He is buried at Old Jewish Cemetery, Lublin