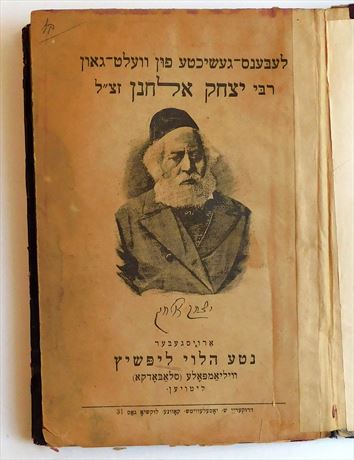 Biography of R. Isaac Elhanan Spektor (1817–1896), rabbi of Kovna. He was born in the province of Grodno, Russia, and one of his teachers was R. Benjamin Diskin. After serving as rabbi in various towns, R. Spektor went to Kovno, where he officiated until his death. In Kovno he attained eminence as a rabbinic authority and established a yeshivah (kolel avrekhim) for the training of outstanding rabbis. He was unsuccessful in his struggle to obtain official recognition for rabbis who were not government appointees. On the other hand he struggled successfully against a law requiring an official examination in Russian from Jewish teachers and also secured the withdrawal of a government decree prohibiting Jewish instruction in the heder. At R. Spektor's instigation R. Samson Raphael Hirsch wrote his book on the relationship of the Talmud to Judaism, which was submitted to the Russian government. He supported Isaac Dembo of Petersburg in his successful campaign against the ban on shehitah in Russia. He frequently organized aid for stricken communities in Russia, Lithuania, and other countries. Individuals and communities in distress, from all areas of Jewish settlement, turned to him. He sought government permission for the provision of kasher food to Jewish soldiers, and maintained a soup kitchen in Kovno until his death. He was the only rabbi invited to the conference of Jewish leaders held in St. Petersburg (Leningrad) in 1881–82 to discuss the deteriorating position of the Jews. He later dispatched a manifesto to David Asher, secretary of the chief rabbi of London, which resulted in protest meetings being held in England, France, Italy, and the U.S. These meetings, whose resolutions were submitted to the Russian government, attracted much publicity and led to the establishment of welfare funds. In later years he made similar pleas and participated in subsequent conferences of Jewish leaders, maintaining confidential contact with influential Jewish circles. With the increasing Jewish emigration from Russia, he supported the efforts of the Hovevei Zion movement, thereby adding greatly to the movement's prestige. The preparatory meetings for the appointment of representatives to the Kattowitz conference were held in his home, two delegates being appointed, though he refused to accept nomination as honorary trustee at the Hovevei Zion conference held in Druskininkai in 1887. After the movement was given official recognition, he publicly proclaimed the religious duty of settling in Erez Israel, signing an appeal for the collection of funds for this purpose in synagogues on the eve of the Day of Atonement. On the question of agricultural labor in Erez Israel in a shemittah ("sabbatical") year, he favored its permission by the nominal sale of land to a non-Jew, a measure which is employed to the present day. His ban on Corfu etrogim enabled the Erez Israel variety to enter the market. He also concerned himself with the amelioration of the spiritual and religious needs of Jewish settlers in Argentina and the U.S. R. Spektor won universal admiration for his broad-mindedness and peace-loving disposition. In 1889 he was elected an honorary member of the Society for the Promotion of Culture among the Jews of Russia. He was frequently requested to serve as arbitrator. In a dispute over shehitah, referred to him from London in 1891, he supported the chief rabbi against the ultra-Orthodox element.

His works are: Be'er Yizhak (1858; 1948); Nahal Yizhak (2 pts., 1872–84); Ein Yizhak (2 pts., 1889–95); Ez Peri (1881; 1903); Devar ha-Shemittah (1889). His letters have been printed in various collections. His works contain commentaries and novellae to the Shulhan Arukh, particularly responsa to questions submitted to him from the various Jewish communities in which he was regarded as the leading authority of his generation. R. Spektor exercised leniency, particularly in relieving the burden of many agunot. His 158 responsa on this subject reveal only three cases where he could not find a basis for permitting the woman to remarry. Many Torah institutions were named after him.