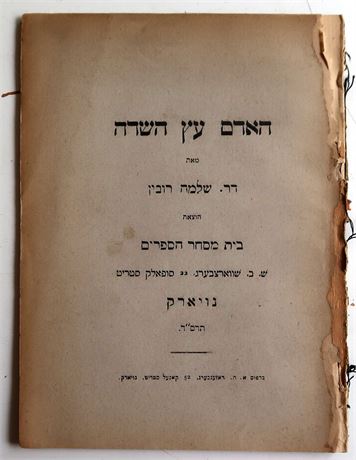 Dr. Solomon Rubin (1823–1910), Hebrew writer, was born in Dolina, Galicia, Rubin was one of the most prolific writers of the Haskalah period; his main subjects were general and Jewish folklore, customs, superstitions, and the like. Rubin's work was for the most part devoted to the study of thought and of popular beliefs accepted as sacred. His sympathy for the victims of intellectual censorship induced him to translate K. Gutzkow's Uriel Acosta (1857; see Uriel da Costa) from German to Hebrew, and this led him to an interest in Spinoza, whose writings preoccupied him for an extended period.

He published Moreh Nevukhim he-Hadash (2 vols., 1857), a synopsis of Spinoza's two books on the basis of the French adaptation of Emile Laisset, and, when this resulted in attacks upon him and Spinoza by Samuel David Luzzatto, he countered with Teshuvah Nizzahat (1859). A book on Spinoza and Maimonides (in German, 1869) earned him his doctorate at the University of Goettingen. He also wrote on Spinoza in Ha-Shahar, and published two additional works on the philosopher: Hegyonei Spinoza (1897), on divinity, the universe, and the soul of man, and Barukh Spinoza (1910). He also translated Spinoza's "Ethics" into Hebrew (Heker Eloha im Torat ha-Adam; 1885) and his grammar (Dikduk Sefat Ever; 1905), in the introduction to which Rubin discusses the Sephardi pronunciation, which formed the basis of Spinoza's Hebrew grammar. Rubin also wrote Tehillat ha-Kesilim (1888), a parody in the style of Erasmus' In Praise of Folly, the only book of its kind in Hebrew.