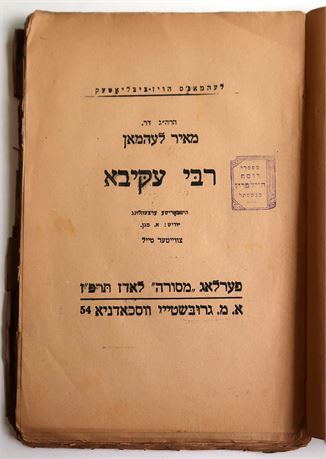 One of Dr. Lehmann's stories for youngsters to acquaint them with Judaism's notables. In this volume he depicts the life of Rebbe Akiva from his exhile to Yavne forward. Dr. Marcus Lehmann (Meir; 1831–1890), was born in Verden, Germany, and studied with R. Israel Hildesheimer in Halberstadt, with R. S. L. Rapoport in Prague, and at Halle. In Prague he was friendly with the writer Solomon Kohn, who may have influenced R. Lehmann's future work as a writer. In 1853 an organ was introduced in the synagogue of Mainz and in 1854, when the Orthodox members formed a separate congregation, R. Lehmann was elected their rabbi and, eventually, one of the leaders and spokesmen of modern German Orthodoxy. In Mainz he founded a religious school which from 1859 was an elementary day school for boys and girls. R. Lehmann wrote polemically against Reform and founded the weekly Israelit (1860–1938) to counter the influence of Ludwig Philippson's Reform periodical, Allgemeine Zeitung des Judentums; the Israelit became the principal voice of German Orthodoxy. R. Lehmann was the main contributor to the Israelit and his many historical novels, including Rabbi Joselmann von Rosheim (translated into English as Tales of Yore, 1947), and short stories were first published in it. His stories were collected in Aus Vergangenheit und Gegenwart (6 vols., 1872–88), and many were translated or adapted into Hebrew, Judeo-Arabic, French, Hungarian, English, and other languages. R. Lehmann's stories have great religious and educational value. Of more scholarly importance, though also primarily intended for popular instruction, are his German edition of the Haggadah (1906, 1914, 1926), anonymously revised and enlarged by H. Ehrmann and translated into English (1969), and his Sabbath lectures on Avot, collected as Die Sprueche der Vaeter (in installments, in: Israelit, 1895–1905; 3 vols., 1921/23) in which R. Lehmann made use of earlier commentators, particularly of R. Samuel b. Isaac's Midrash Shemu'el, and thus made the commentators accessible to the German reader. R. Lehmann also published the tractate Berakhot of the Jerusalem Talmud with the commentary of Solomon Sirillo and his own notes, Meir Nativ (1874). R. Lehmann translated the Pentateuch (1873, 19136) in the Bible translation initiated by the Orthodox Bible Institute to counter the translation of Zunz and others. As editor of the Israelit, R. Lehmann inclined increasingly to R. S. R. Hirsch's intransigent line in R. Hirsch's differences with R. Hildesheimer, R. Lehmann's friend and teacher.