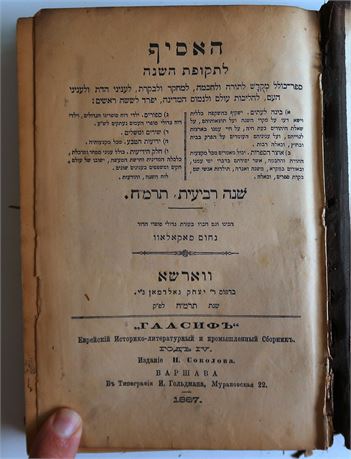 Annual edited by Nahum Sokolow (1859–1936) Hebrew writer and journalist, and president of the World Zionist Organization. Sokolow was born in Wyszogrod, Poland. He received a fundamental Jewish education and also acquired a general education. After his marriage at the age of 17 he lived in his father-in-law's house in Makow, and pursued his studies. He began to write in a variety of fields - commentaries on Jewish topics, poetry, stories, plays, scientific articles, etc. Sokolow wrote for the Hebrew newspaper Ha-Zefirah (1876) and soon became its regular columnist on scientific affairs. His first book also dealt with the natural sciences, geography and geology (Mazzukei Arez, 1878). Sokolow moved to Warsaw (1880), where his writing took a decisive turn with the publication of the first of a series of articles in Ha-Zefirah entitled "Zofeh le-Veit Yisrael". The column treated current affairs in a feature-writing style in a rich and sparkling Hebrew. From that time he was the regular columnist for Ha-Zefirah, finally becoming its acting editor.

Sokolow was the first in the history of the Hebrew press and literature to create a vast reading public, an unusual mixture encompassing maskilim (Western-oriented secularists), extreme Orthodox rabbis, and religious Jews. Sokolow expressed reservations about the Hibbat Zion movement when it first appeared. He even attacked J. L. Pinsker's Autoemancipation, continuing in this line until the First Zionist Congress (1897). In the spring of 1886 Ha-Zefirah became a daily, and Sokolow himself filled practically every issue, while also writing in other periodicals and other languages. A major turning point in his life was meeting Theodor Herzl. At first he received Herzl's Jewish State with reservations. But after his participation in the First Zionist Congress as the correspondent for Ha-Zefirah, he became one of Herzl's greatest admirers, and turned Ha-Zefirah into his most loyal and dedicated Hebrew organ. Sokolow translated Herzl's Zionist novel Altneuland into Hebrew under the title Tel-Aviv (a site mentioned in Ezek. 3:15), by which he meant to symbolize the original name of the book (old-new land; tel meaning a hill of ruins, aviv meaning spring), and thereby inspired the name for the first Jewish city in Erez Israel. During the controversy over the Uganda Scheme, his newspaper was the most devoted to Herzl and the plan, although it also published articles against the Scheme. Above all, Sokolow wanted to preserve the unity of the Zionist Organization.

At the beginning of 1906, Ha-Zefirah ceased publication, and in the same year Sokolow was invited to serve as the general secretary of the World Zionist Organization. He established the official Hebrew weekly of the Zionist Organization, Haolam (1907). From then on, Sokolow's life was intimately connected with the history of the Zionist movement. He rose to become a member of the Zionist Executive in 1911 and was reelected in 1913. During this time, Sokolow began meeting with European personalities. With the outbreak of World War I, he moved to London and, together with Weizmann, was involved in Zionist political activity in England and in other countries (France, Italy, etc.). After Herzl, Sokolow was the first Zionist to have an audience with the pope whom he kept informed on the affairs of the Zionist movement (1917). He played an important role in the efforts which eventually achieved the Balfour Declaration and helped prepare the wording of the declaration, in addition to procuring the approval of statesmen from other countries for it. He became one of the most outstanding figures in the Zionist movement both through his connections with diplomats of many nations and his deep roots in the Jewish world.

During the period of political work for the Balfour Declaration, Sokolow was also involved in preparing his monumental work entitled History of Zionism, 1600–1918. The work not only provides a comprehensive description of the Jewish people's attachment to Erez Israel but also describes the relationship of non-Jews to the idea of the return of the Jews to Erez Israel. He revealed a mass of new material, especially on the personalities in England who had preached the return of the Jews to their homeland for hundreds of years. Sokolow wished to prove indirectly that the Balfour Declaration grew out of a rich tradition in England. In his introduction to the book, Lord Balfour expressed his own credo through a defense of the Zionist idea against opposition from a number of viewpoints.

After World War I, when the solution of all problems, including the Jewish problem, was the prevailing mood toward peace, Sokolow headed the Jewish delegation to the Paris Peace Conference. His appearance before the conference on Feb. 27, 1919, was most impressive. Weizmann described Sokolow's speech in Trial and Error (1949, p. 243): "... without being sentimental, it was as if two thousand years of Jewish suffering rested on his shoulders.” From that time on, Sokolow appeared at every general Jewish and Zionist assembly, and was chairman of most of them. When the Zionist Executive was consolidated after the war, he was elected as its head. He was also the head of the Comite des DMlMgations Juives, the representative of world Jewry at the League of Nations. At the Zionist London Conference (1920), which adjusted Zionist policy and organization to the post-war reality, Sokolow was not only one of the principal speakers, but also the one who named the new Zionist fund Keren Hayesod. From that time until the end of his life he traveled throughout the Jewish world on behalf of the fund. Sokolow was chosen chairman of the 12th Zionist Congress (the first congress to convene after the war; Carlsbad, 1921) and was chairman of every succeeding congress until his death, and would speak on the situation of the Jews of the Diaspora. During his trips he would constantly meet with public leaders and heads of government and would obtain pro-Zionist statements from them. When the enlarged Jewish Agency was established in 1929, Sokolow became chairman of its Executive. He died in London. In 1956 his remains were reinterred on Mount Herzl in Jerusalem.