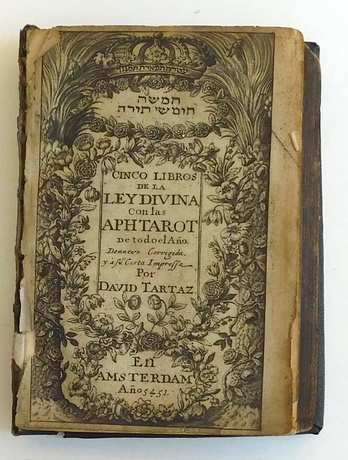 Bible, Pentateuch andHaftarot in Spanish, the fourth edition of the Humas (Pentateuco) in Spanish published in Amsterdam from the original text of Ferrara. As with the previous versions, this one includes the changes made by Menasseh ben Israel in his second edition of the Pentateuco (Humas or Cinco tibros de la Ley divina ... Amsterdam, 1655). The front cover is finely engraved: the text is framed by floral motives with a crown on the top. The Pentateuco is followed by Libra de las aphtarat de todo el eiio, sabatoth, ros-hodes, fiestas, solemnidades y ayunos que celebra el pueblo de Ysrael sequn el uzo del Kahal Kados de Espana.

Marranos or Conversos were Jews living in Iberia who were forced to convert to Christianity during the Middle Ages yet continued to practice Judaism in secret. "Marrano" is now often considered offensive and "crypto-Jew" is preferred in scholarly works. Marranos did not arrive in Amsterdam until around 1590, some 11 years after the Union of Utrecht (1579) and the birth of the United Provinces of the Netherlands as a Protestant state. They had to wait until 1615 before Jewish settlement was officially authorized, but the Marranos in Amsterdam differed from those in other Protestant countries in that they openly practiced Judaism almost from the moment of their arrival. Thanks to the Marranos, Amsterdam became one of the greatest Jewish centers in the world in the 17th century; it had some of the finest academies and produced some of the greatest Jewish thinkers.