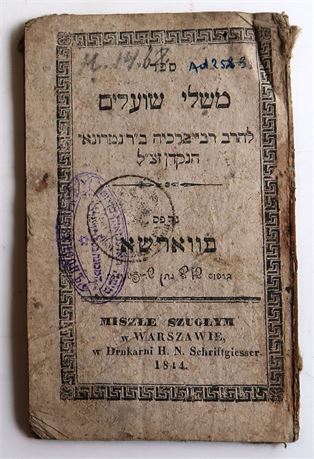 Fables translated mostly from the French fable collection Ysopet by Marie de France (c. 1170), and also from the lost Latin translation of Aesop, Romulus, as well as from other collections of Oriental origin. Berechiah writes in his preface: "These fables are well-known to all mankind and are in books by people of all languages, but my faith differs from theirs." The preface contains an appraisal in rhyming puns of the low moral state of English Jewry as seen through Berechiah's eyes: "The wicked are saved, the righteous groan, the bitter are sweetened, the evil rise, while the great are cast down, and prayer is tasteless, glory is folly, and the sacrifice is wicked." He concludes, "I would prefer toil and a dry crust to sharing my lot with them." Mishlei Shu'alim has appeared in 18 editions, most of them, including the first (Mantua 1557–59), being incomplete. Berechiah has been identified with Krespia or Crispia the grammarian, one of whose fables (Fable 119) was included in Mishlei Shu'alim, but this identification is unfounded. Berechiah's son, Elijah, who lived in "the city of Radom" (Darom, i.e., Dreux) was a copyist and grammarian. In those of his texts which have survived he expresses his feeling of honor at his father's respected position and refers to him as "the tanna and pedant."

R. Berechiah b. Natronai Ha'Nakdan (end of 12th–13th century), fabulist, translator, thinker, copyist, and grammarian. Berechiah lived in Normandy and at a certain period also in England. His title ha-Nakdan testifies to the fact that he punctuated Hebrew books. He also knew foreign languages and translated and adapted several books into Hebrew, including Quaestiones Naturales by Adelard of Bath, a popular 12th-century book on natural sciences. Berechiah entitled it Dodi ve-Nekhdi or Ha-She'elot (ed. by H. Gollancz, 1920). His collections of ethical treatises Sefer ha-Hibbur and Sefer ha-Mazref (ed. by Gollancz, The Ethical Treatises of Berachyah, son of Rabbi Natronai Ha-Nakdan, 1902) summarized the opinions expressed in R. Saadiah Gaon's Emunot ve-De'ot (of which Berechiah used the old, unprinted translation in Hebrew), as well as the opinions of other geonim. In these essays he invented several Hebrew terms for philosophical concepts. He also wrote Ko'ah Avanim (unpublished), a translation-adaption of a Latin book about the magical powers in stones.