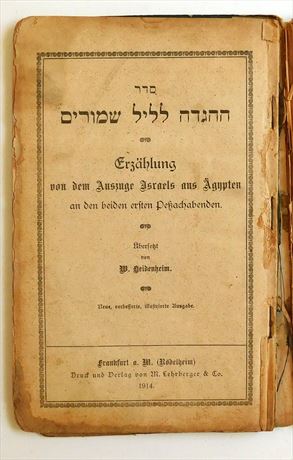 Wolf Heidenheim (Benjamin Ze'ev; 1757–1832), was born in Heidenheim, Germany, he studied with Rabbi Nathan Adler in Frankfort. In 1788 he established himself in Offenbach, where he subsequently published Abraham ibn Ezra's grammatical work Moznayim (1791), with commentary and notes and part of an edition of the Pentateuch (up to Gen. 43:16) with a carefully corrected text of the Targum and several commentaries, together with explanations and a detailed commentary on Rashi by Heidenheim (Torat Elohim Meforash). He was obliged to abandon the project for financial reasons.

In 1798 he received a license to establish a German and Hebrew press in partnership with Baruch Baschwitz. In 1800 Heidenheim began the publication of his most famous work, the nine-volume edition of the mahzor, Sefer Kerovot (Roedelheim, 1800–02), which went through numerous printings. The work included the first pure German translation (in Hebrew characters) of the liturgical poems for the festivals (individual pieces were translated by his friends Wolf Breidenbach and Baer Bing), a Hebrew commentary and a literary historical introduction, and an alphabetical summary of the liturgical poets. Heidenheim devoted great care to typographical setup as well as to the restoration of the correct text of the prayers. With this objective, he drew on manuscripts and occasionally on old printed texts. The prominent rabbis of his time approved of Heidenheim's work and also contributed notes and comments to many piyyutim. Despite the haskamot of these rabbis prohibiting the reprinting of Heidenheim's mahzor, many pirated editions appeared in the 19th century.

His other works in the field of liturgy include a small edition of the daily prayers, Sefat Emet (Roedelheim, 1806), distinguished for its correctness and typographical beauty, which went through more than 150 printings; a larger prayer book, Safah Berurah (1825), with German translation in Hebrew characters; the ritual for Passover eve (Roedelheim, 1822–23); for Purim (1825); for the month of Av (1826); for the night of Shavu'ot and Hoshana Rabba (1830); and penitential prayers (Roedelheim, 1823). In the edition of the prayer book Siddur li-Venei Yisrael (1831), which presented his translation in German letters for the first time, Heidenheim made many concessions to efforts for reform in that he omitted individual prayers and printed a preface by Michael D. Creizenach on the prayers. In Orthodox circles, Heidenheim was very much blamed for this, just as his approval of the innovations of the Kassel Consistory (in his foreword to Menachem Mendel Steinhardt's Divrei Iggeret, Roedelheim, 1812) had shocked them. Heidenheim also made major contributions to the field of masoretic studies. He published the Mishpetei ha-Te'amim (Roedelheim, 1808) on biblical accents; and an edition of the Pentateuch in four different forms, all containing material important to the masoretic text and commentaries, as well as the editions of medieval masoretic texts. Works of later scholars heavily relied on Heidenheim's materials, both printed and manuscripts. Many of Heidenheim's works remained unpublished and most of his manuscripts were acquired by the Bodleian Library in Oxford.