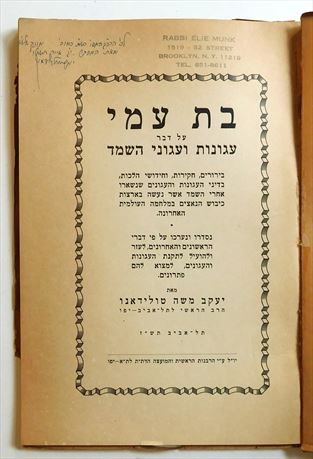 Inscribed by Author on title.

Responsa  on the issue of Agunot and Yibum by R. Jacob Moshe Toledano (1880–1960), rabbi and scholar. Toledano's father Judah had immigrated from Morocco. Jacob was born, educated, and ordained in Tiberias. During 1899–1909, his first articles appeared in the Jerusalem Hebrew paper Havazzelet, under the title Hiddushei Torah. They were written in elegant Hebrew and in a scholarly style. Toledano was also interested in ancient manuscripts preserved in the libraries and yeshivot of oriental countries. He conceived the idea of founding a society to publish them and with this aim in mind entered into correspondence with scholars in western countries who encouraged him to implement the project. As a result of the cholera epidemic in Tiberias in 1903, he and his family left the town and settled in Peki'in. During the seven years he lived there he devoted himself to the study of the history of oriental Jewry and its personalities, as well as to the affairs of the Peki'in community, and published his Ner ha-Ma'arav. At the beginning of World War I, together with 700 "French" Jews (of North African descent) from Galilee, he was exiled from Erez Israel to Corsica because of his French citizenship. As the representative of the Alliance IsraMlite Universelle and the French government, he headed the committee of exiles and worked for their material and spiritual benefit. In 1920 he returned to Tiberias and took part in activities to revive communal life in the town; he represented it in 1921 at the rabbinical conference held in Jerusalem to establish the chief rabbinate of Erez Israel. In 1926 he was appointed a member of the Tangier rabbinate, and in 1929 av bet din and deputy chief rabbi of Cairo. In 1933 he was appointed to the similar office in Alexandria, as well as deputy head of the rabbinical court of appeals in Cairo, and in 1937 he became chief rabbi of Alexandria. In 1942 he was elected Sephardi chief rabbi of Tel Aviv-Jaffa, succeeding Ben Zion Ouziel. In 1958, when the religious parties had left the government coalition, he was appointed minister of religious affairs.

His other books included Appiryon (Jerusalem, 1905), a bibliography of the supercommentators to Rashi's commentary to the Pentateuch; Yedei Moshe (Safed, 1915), a commentary on the Mishnah Pesahim by Maimonides from a manuscript; Yam ha-Gadol (Cairo, 1931), responsa; Sarid u-Falit (Tel Aviv, 1945), giving passages from manuscripts on ancient works dealing with the Talmud, Jewish scholarship, the history of the settlement in Erez Israel, and bibliography; and Ozar Genazim (1960), a collection of letters on the history of Erez Israel from ancient manuscripts, with introductions and notes.

An agunah is a married woman who for whatsoever reason is separated from her husband and cannot remarry, either because she cannot obtain a divorce from him , or because it is unknown whether he is still alive. The term is also applied to a yevamah ("a levirate widow"; if she cannot obtain halizah from the levir or if it is unknown whether he is still alive (Git. 26b, 33a; Yev. 94a; and Posekim). The problem of the agunah is one of the most complex in halakhic discussions and is treated in great detail in halakhic literature (no less than six volumes of Oẓar ha-Posekim are devoted to it. The halakhah prescribes that a marriage can only be dissolved by divorce or the death of either spouse. According to Jewish law, divorce is effected not by decree of the court, but by the parties themselves, i.e., by the husband's delivery of a get ("bill of divorce") to his wife. Hence the absence of the husband or his willful refusal to deliver the get precludes any possibility of a divorce. Similarly the mere disappearance of the husband, where there is no proof of his death, is not sufficient for a declaration by the court to the effect that a wife is a widow and her marriage thus dissolved. In most cases of agunot the question is whether or not the husband is still alive. Such cases result, for instance, from uncertainty about the husband's fate caused by conditions of war.

Yibbum is the form of levirate marriage found in Judaism. As specified by Deuteronomy 25:5-10, the brother of a man who died without children is permitted and encouraged to marry the widow. However, if either of the parties refuses to go through with the marriage, both are required to go through a ceremony known as halizah, involving a symbolic act of renunciation of their right to perform this marriage.