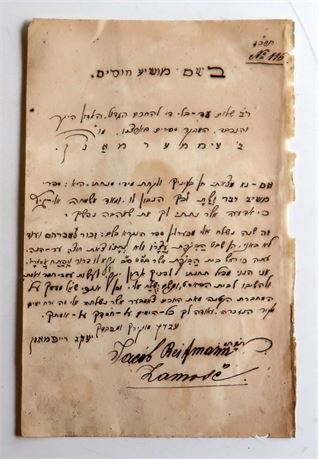 Jacob ben Zevi Hirsch Reifmann (1818–1895), scholar and writer. Reifmann, born in the Lagow district of Radom, Poland, was raised in Apta and subsequently lived in Lublin, Zamosc, and Szczebrzeszyn. Growing estranged from Ḥasidim, who were then dominant where he lived, Reifmann turned more to the Haskalah. His field was criticism of the Bible and the Talmud. Highly respected in scholarly circles for his erudition and critical mind, Reifmann also caused antagonism, especially because he was outspoken. His life was spent in great poverty, and he did not receive any official position or recognition. The conflicts in his attempt to merge his traditional East European background with modern Western scholarship are apparent in his writing, and probably also contributed to his difficulties in adjusting to his environment. Reifmann contributed hundreds of articles to the Hebrew periodicals of his time, and wrote 17 books. He covered a wide variety of areas, including Bible, Talmud, rabbinic literature, Aramaic translations of the Bible, liturgy, Jewish philosophy, and biography. He corresponded with such leading scholars of his time as S.J.L. Rapoport, L. Geiger, H. Graetz, M. Steinschneider, and S.D. Luzzatto. His correspondence and some of his unpublished writings are at the library of the Jewish Theological Seminary of America. Among Reifmann's other works are Tavnit ha-Bayit (1844) and Pesher Davar (1845), critical studies on talmudic matters; Toledot Rabbenu Zeraḥyah ha-Levi (1853), a biography; Ḥut ha-Meshullash (1859), on the familiarity of talmudic rabbis with foreign languages, on the history of fables among the Jews, and notes to the book Mivḥar ha-Peninim ; Beit ha-Talmud (vol. 3), on the problems concerning the geonic work, She'iltot; Sedeh Aram (1875), on Targum Onkelos; and Or Boker (1879), on talmudic criticism. Some of his works were published by M. Herskovics in Hadarom (1964–69) and by N. Ben-Menahem, Iggeret Bikkoret al Seder ha-Haggadah shel Pesaḥ (1969) and Iyyunim be-Mishnat Avraham ibn Ezra (1962).