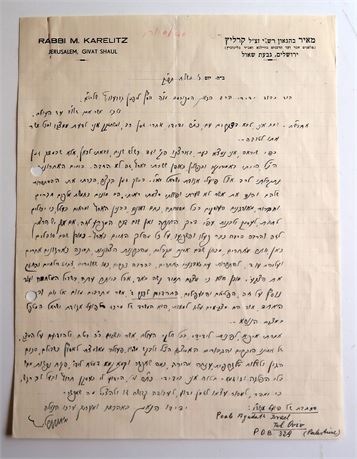 Letter by R. Meir b. Yosef Shmariyahu  Korelitz (1875 - 1955),  rabbi of Llachovic, head of yeshivas in Poland and in Israel, founder and a member of the Independent Education Council of Torah Sages, older brother of the Hazon Ish. He was born in Kosova town in the district of Grodno and studied in his youth in Smorgon. For several years he served as rabbi of the town of Llachovic' Brest district (now in Belarus). On the eve of World War II he came to Erez Israel. R. Korelitz was as a member of the Council of Torah Sages of Agudath Israel. He also served as rabbi of Agudat Israel Workers Party. In (1951) he resigned on the grounds that the party does not obey his advice and rulings.