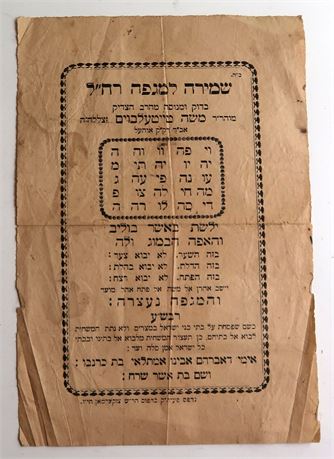 Kabbalsitic Shemira Amulet by R. Moses b. Zvi Teitelbaum of Ujhely (Satoraljaujhely in Hungary; 1759–1841). He was born in Przemysl, Galicia, a pupil of R. Jacob Isaac ha-Hozeh (the Seer) of Lublin, he first served as rabbi at Sieniawa (Galicia) and from 1808 at Ujhely. R. Moses was among the first to spread Hasidism in the northern and central districts of Hungary. He won renown as a learned man and a wonder-working zaddik among all sectors of the Jewish community, both Hasidim and others. He wrote Yismah Moshe (Lemberg, 1848–61), considered one of the classic homiletic works of Hasidism, and responsa, Heshiv Moshe (Lemberg, 1866).

Amulets are frequently mentioned in talmudic literature. The term used is kame'a or kami'a (pl. kemi'ot or kemi'in), a word whose origin is obscure. The written kame'a was a parchment inscribed with one or more quotations from a variety of sources, including the Scriptures (cf. Shab. 61b). Later amulets were inscribed with quotations relevant to their specific purpose. The text of the Priestly Blessing (Num. 6:24–26) was considered effective against the "evil eye." Permutations and combinations of the letters of the different names of G-d were frequently used; names of angels were also very common. Amulets subsequently merged with the Kabbalah and came to be known as "practical Kabbalah." Many mystical texts, such as the Sefer Yezirah and the Sefer Razi'el, contain instructions for the preparation of amulets and other charms, for a variety of purposes.