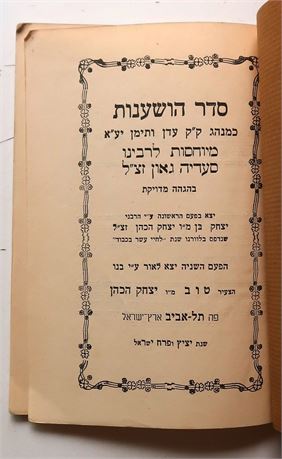 Hoshanot following the rites of Aden and Yemen. The text of the Hoshanot prayers according to the custom of Italy. Hoshanot are poetical prayers, thus named because of the recurrent expression "Hoshana" (or "Hoshi'a Na," "Save, I Pray!"). Hoshanot are recited on every day of Sukkot, usually after the Shaharit or Musaf prayers. Each day while they are said a circuit is made of the synagogue (on the seventh day, seven circuits). The origin of the prayers and the procession lies in the Temple ritual: "Every day [of Sukkot] one circles the altar once and says, 'Pray! O L-rd, save, I pray! Pray! O L-rd, give success, I pray!'; (Suk. 4:5). The first references to this practice in the synagogue come from the period of the geonim. ,p> Already in ancient times, the words hosha na were linked into one word hoshana. The word served as a response, or a call, after every rhyme or section of prayers which were composed in later generations for this purpose. Of these prayers (usually written in alphabetical order), many are undefined in content (e.g., "For the sake of Thy truth, for the sake of Thy covenant"); others are supplications for water or for a blessing for the produce (e.g., "Save, I pray! the land from being cursed, the animal from losing its offspring"); while still others are concerned with salvation from exile and with redemption.

In all prayer books, from those of R. Amram Gaon and R. Saadiah Gaon to those of the present day, there are hoshanot on various subjects and in different forms. It can be assumed that several of the hoshanot, which are signed with the name "Eleazar," were written by R. Eleazar Kallir. There is insufficient evidence, however, to determine the authorship of other hoshanot. Some were also written for the Sabbath of Sukkot, and include topics pertaining to the Sabbath. But on that day there is no procession. In some rites hoshanot are not recited on the Sabbath of Sukkot at all. The hoshanot of the seventh day, Hoshana Rabba, are of a special character. Seven processions take place; in some rites the hoshanot of all the previous days are repeated while others recite hoshanot written specially for this day. Under the influence of the Kabbalah, piyyutim dealing with the seven guests (Ushpizin) have been supplemented to the hoshanot of this day. Indeed, the seven processions allude to them.

Aden had a medieval Jewish community of great importance for the history of Jewish letters. It reached its peak during the 12th century. There were business and family ties, as well as communal and religious relations between the Jews of Aden and practically all the Jewish communities of the Islamic empire. “Aden and India" formed one juridical diocese: the Jewish merchants and craftsmen of about twenty different ports of India and Ceylon were under the jurisdiction of the rabbinical court of Aden. In Yemen itself the authority of the court of Aden extended as far as Sa'da, the northernmost important Jewish community of the country.

The Jews of Aden were ardent collectors of books. R. Madmun b. David in his letter of July 1202 asked to have the medical treatises of Maimonides and other useful books sent to him; he specifically requested copies written on good paper and in a clear hand. The Jews of Aden were such avid bibliophiles that the Egyptian India traveler Halfon b. Nethanel went there for books that he could not get elsewhere. Many of the most important literary creations written in Hebrew, such as the poems of R. Judah Halevi and R. Moses ibn Ezra, have been preserved in manuscripts found in Yemen. The Midrash ha-Gadol of David Adani shows that he possessed an exceptionally rich, specialized library, containing works that have not yet been found in their entirety elsewhere.

A Hebrew printing house was founded in Aden in 1891 by Menahem 'Awwad and his four partners. Until 1925 some 15 books were printed at this press, The “Caxton Press," established in 1929, also published four Hebrew works. All the books printed in Aden are collections of prayers, religious law, etc.