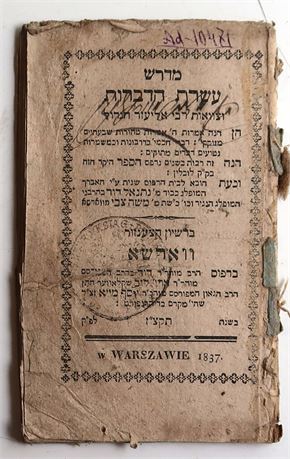 Two popular ethical and kabbalistic works in one volume. The Zavvah is attributed to R. Eliezer b. Isaac of Worms (also called "Eliezer ha-Gadol"; 11th century), German talmudic scholar. R. Eliezer was a pupil of his relative R. Simeon ha-Gadol, in Mainz, and later of R. Gershom Me'or ha-Golah, and R. Judah ha-Kohen, author of Sefer ha-Dinim. He was a friend of R. Jacob b. Jakar (Rokeah, Ha-Tefillah 21; R. Joseph Solomon Delmedigo, Mazref le-Hokhmah 14:2). After the death of R. Gershom, he and R. Jacob b. Yakar headed the yeshiva of Mainz, which numbered among its pupils R. Isaac ha-Levi and R. Isaac b. Judah, the teacher of Rashi, who mentions R. Eliezer several times in his commentaries to the Bible (e.g., Ps. 76:11) and the Talmud (Pes. 76b) calling him "ha-Gadol" or "ha-Ga'on." A number of R. Eliezer's decisions and instructions have been preserved in works issuing from Rashi's school, including the Sefer ha-Pardes. R. Menahem b. Judah di Lonzano attributes to R. Eliezer the well-known work, Orhot Hayyim or Zavva'at R. Eli'ezer ha-Gadol, which had previously been attributed to R. Eliezer b. Hyrcanus. The suggestion that R. Eliezer was the father of R. Tobiah b. Eliezer, author of the Lekah Tov, is without firm foundation. The selihah "Elohai Basser" recited in the Yom Kippur Katan service, which bears R. Eliezer's name in acrostic form, has been attributed to him.