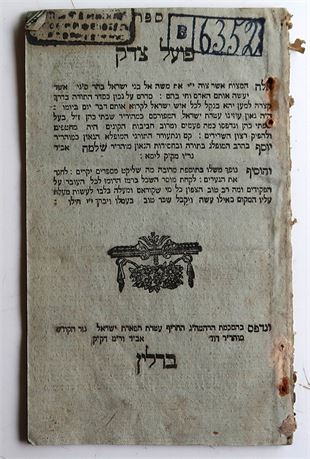 The 613 commandments as enumerated by Maimonides, divided for the seven days of the week by R.Shabbatai ben Meir HaKohen (1621–1662), Lithuanian rabbi, commentator on the Shulḥan Arukh, and posek. He was also known as the Sha-Kh from the initials of the title of his book, Siftei Kohen. R. Shabbetai was born in Amstivov near Vilkaviskis. In his youth he studied under his father and later under R. Joshua Hoeschel b. Joseph in Tykocin, moving subsequently to the yeshivah of Cracow with his teacher. From there he proceeded to Lublin, where he studied also under R. Naphtali b. Isaac ha-Kohen. While still young he returned to Vilna, where he married the daughter of the wealthy Samson Wolf, a grandson of R. Moses Isserles. Shabbetai's father-in-law provided for all his material needs and he was able to devote himself wholly to study. His renown soon spread among scholars and he was appointed dayyan in the bet din of Moses Lima in Vilna. In Cracow in 1646, R. Shabbetai published his first work, Siftei Kohen, on the Shulḥan Arukh, Yoreh De'ah. This work received the approbation of the greatest Polish and Lithuanian scholars and since 1674 has been published in most editions of the Yoreh De'ah. That same year also saw the publication of the commentary Turei Zahav to the Yoreh De'ah by R. David b. Samuel ha-Levi , who was already renowned and accepted as a posek. Shabbetai thereupon wrote criticisms to Turei Zahav entitled Nekuddot ha-Kesef. Although it was only published after the death of both R. Shabbetai and R. David ha-Levi (Frankfurt on the Oder, 1677), many of the criticisms reached the ears of David ha-Levi during his lifetime and he replied to them. These were published at the end of the commentary Turei Zahav with the title Daf Aḥaron ("Last Page") and were read by R. Shabbetai, who replied in his Kunteres Aḥaron ("Last Addendum"), published at the end of Nekuddot ha-Kesef.

The halakhic dispute between the views of R. David ha-Levi and R. Shabbetai, even after their deaths, was continued by other scholars. In most cases the rabbis of Poland and Lithuania ruled in accordance with Shabbetai, while those of Germany accepted the view of R David ha-Levi. In contrast to many of the Polish scholars who preceded him and who criticized the author of the Shulḥan Arukh, R. Joseph Caro, R. Shabbetai attempted to justify him fully. In his commentary on the Yoreh De'ah, he attempts to explain and clarify Caro's statements and to decide between Caro and the criticisms made by R Moses Isserles. R. Shabbetai also wrote a commentary on the Ḥoshen Mishpat, which was published after his death with the text of the Shulḥan Arukh (Amsterdam, 1663). In this work, too, he explains the rulings of Caro but does not refrain from criticizing them; nor did he hesitate to criticize his other predecessors where their ruling did not appeal to him, or where he thought they had erred in their halakhic decisions. His rulings are based not only upon the principles of the Talmud and posekim but also upon logic and reason, although he did not abstain from the use of pilpul. His work is a classic of its kind and has been accepted to the present day as an authoritative reference work for halakhic authorities.

During the persecutions suffered by Lithuanian Jewry in 1655 (a continuation of the massacres of 1648–49), R. Shabbetai was compelled to flee from Vilna to Lublin, but only three months later the rioters reached Lublin, and R. Shabbetai succeeded in escaping to Bohemia. He stayed first in Prague, and then for a time in Dresnitz, Moravia, after which he was appointed rabbi of Holesov, where he died. R.Shabbetai, who had a polished, elegant, and facile style of writing, also had a historical sense. He portrayed the Chmielnicki persecutions of 1648–49 in his Megillat Eifah (Amsterdam, 1651), in which he described the events and the sufferings through which the Jews of Poland passed during that era. This work is an important historical document and has been translated into German and Russian. He also composed seliḥot (publ. in Amsterdam, 1651), in which he poured out his bitter complaints. He charged his children and grandchildren always to observe the takkanot of the Councils of the Lands and to appoint the 20 of Sivan as a day of fast, on which they should recite the kinot he compiled.

During the period he was rabbi in Holesov he became friendly with a Christian scholar. In the library of the academy in Leipzig there is a holograph of a Hebrew letter dated Feb. 3, 1660, which R. Shabbetai wrote "to him whom I love as myself, the philosopher magister Valentino Wiedreich." R. Shabbetai informs him that he has sent him the book of Elijah Baḥur and asks him to keep in touch with him (Bikkurei ha-Ittim, 10 (1829), 43–44).

His other works are: He-Arukh (Berlin, 1767), a commentary on the Arba'ah Turim, Yoreh De'ah of R. Jacob b. Asher; Tokfo Kohen (Frankfurt on the Oder, 1677), on the laws of possession and undecided laws (teiku); Gevurat Anashim (Dessau, 1697), on chapter 154 of the Shulḥan Arukh, Even ha-Ezer, to which are appended ten responsa written by his father.