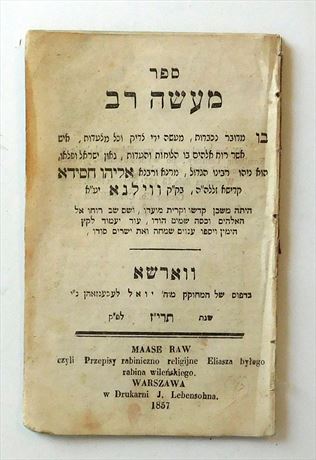 Highly popular work describing the customs of R. Elijah ben Solomon Zalman of Vilna (Vilna Gaon, Gra) the preeminent representative and intellectual leader of Eastern European Jewry. There is a detailed introduction and then the text, which begins with Birkhat ha-Shahar, followed by tefillot, dietary laws, and includes festivals, concluding with Purim.

R. Elijah ben Solomon Zalman of Vilna (1720-97) is a dominant figure in Jewish intellectual thought, his importance and prestige undiminished, as great today, if not greater, than in his own time. The Vilna Gaon’s extraordinary intelligence, expressed by his expertise in Torah at the age of three, outdistancing his tutors while a young child, his incredible proficiency over the entire expanse of the written and Oral Torah by nine, by which time he was already studying Kabbalah, accompanied by complete piety, are attested to by numerous reputable sources. More than seventy works, encompassing Bible, halakhah, Talmud, Kabbalah, and general sciences are attributed to him. Over time, Elijah became known as the Gaon and Ḥasid. The first appellation is based on his enormous scholarship that spanned the entirety of rabbinic literature, including the vast world of Midrash and kabbalistic literature. In addition, the depth of his knowledge and understanding is evident in his writings. The combination of Elijah's asceticism and almost obsessive devotion to Torah study and religious observance earned him the title of Ḥasid. Through his teachings and actions Elijah did much to form the characteristics of the "Litvak" Mitnaggedim peculiar to Lithuanian Jewish culture whose achievements attained their pinnacle of expression in the 19th century in the many celebrated yeshivot of Lithuania, such as those of Volozhin and Mir. The semi-legendary figure of saint and intellectual giant towered over Lithuanian Jewry and influenced its cultural life in the 19th and into the 20th centuries.