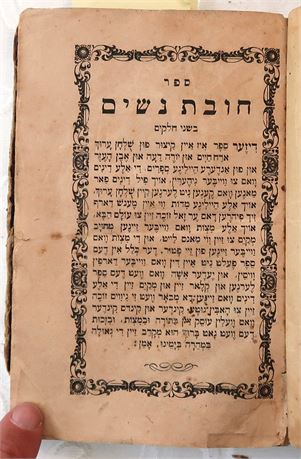 Hovat Nashim - on the religious obligation specific to woman in Yiddish. The title page enumerates them as niddah, melihah, Hallah, hadlakah, and tevillot kellim. Three of the mitzvot are referred to in tractate Shabbat (31a), which states that, "For three transgressions woman die in childbirth. Because they are not observant [of the laws] of Niddah, Hallah, and lighting of Sabbath candles.” The obligations for women addressed here are Niddah (According to Jewish law, a woman is forbidden to maintain sexual relations with her husband during and for some time both before and after (see below) her menses. The laws relating to the menstruous woman comprise some of the most fundamental principles of the halakhic system, while a scrupulous observance of their minutiae has been one of the distinguishing signs of an exemplary traditional Jewish family life. Among the most difficult and intricate in the entire range of the halakhah, these laws are elucidated in a lengthy and detailed tractate of the same name. Melihah (salting of meat), a prohibition against the consumption of blood (Lev. 7:26–27; 17:10–14) and the basis for the process of koshering meat. The purpose of the process is to draw out and drain the meat of non-venial blood, before it is cooked. The blood can be removed either by salting the meat, or by roasting it over an open flame. Hallah; the term origianlly applied to the portion of dough set aside and given to the priest (Num. 15:19–20). Today it refers to the precept of setting aside dough kneaded from one of the five species of grain (Hal. 1:1), since only from them can the bread (referred to in Num. 15:19: "when you eat of the bread of the land" etc.) be made, although Philo (Spec. 132) limits it to wheat and barley alone. The time of setting aside the hallah was derived by the sages from the words, "Of the first of your dough" - which they interpreted as meaning "as soon as it becomes dough" - hence one may eat casually of dough before it forms a ball in the case of wheat, and a lump in the case of barley (Sif. Num. 110), i.e., when the kneading is finished. If, however, it had not been set aside from the dough it must be set aside from the baked bread (ibid.). hadlakah: Shabbat is greeted by lighting candles. The mistress of the house kindles at least two candles before the advent of the Sabbath, one corresponding to "remember the Sabbath day" (Ex. 20:8), the other to "observe the Sabbath day" (Deut. 5:12). Tevillot Kelim is the immersing of new utensils in a mikveh. I do not know why this is included among the specific obligations of women.

Birkhat Menahem - Listing of blessings in Hebrew with Yiddish translation.