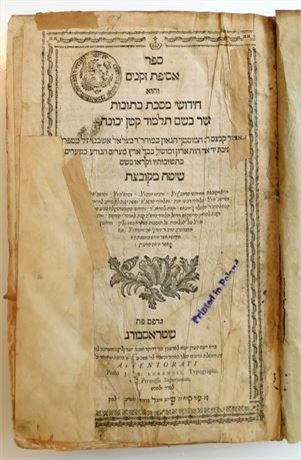 Novellae to tractate Kettubot by R. Bezalel ben Abraham Ashkenazi. The author, a great sage, traveled, and when he did so, occupied himself a great deal with copying and editing old manuscripts, even hiring scribes to help him. He copied the novellae of the geonim and rishonim on the Babylonian Talmud, and these served as the basis for his classic Asefat Zekenim, better known as the Shitah Mekubbeẓet. Through this collection, much of the commentaries and responsa of R. R. Gershom b. Judah, R. Hananel, R. Joseph Ibn Migash, R. Meir ha-Levi Abulafia, and others, was preserved. The book in its different parts has been republished many times, and it serves as a supplement to the tosafot, and the other classical rishonim.

R. Bezalel ben Abraham Ashkenazi (c. 1520–1591/94), talmudist and halakhic authority. R. Ashkenazi was born in Jerusalem or in Safed, where he studied in his youth under R. Israel di Curiel . About 1540 he went to Egypt where he studied in Cairo under R. David b. Solomon ibn Abi Zimra. Later he founded a yeshivah there which numbered among its scholars R. Isaac Luria and R. Abraham Monson. He was a good friend of the poet R. Israel Najara . When David b. Solomon ibn Abi Zimra went to Ereẓ Israel (c. 1553), Ashkenazi succeeded him as head of the Egyptian rabbis. A bitter quarrel arose between him and R. Jacob b. Ḥayyim Talmid , nagid of the Egyptian Jews, and Ashkenazi excommunicated him. Through the intervention of the local authorities, the office of nagid was abolished, and the head of the Jews given the title of "chelebi" (signifying dignitary in Turkish), with rather limited powers. It is highly probable that it was this quarrel which impelled him to leave Egypt. In 1587 he was head of the rabbis of Jerusalem, apparently succeeding R. Ḥayyim Vital . Ashkenazi put new life into the Jerusalem community, instituting numerous communal enactments, exempting scholars from taxation, and persuading the Ashkenazi community to assist in bearing the burden of taxation, though most of them were officially exempt as aliens. He traveled as an emissary to a number of countries, collecting money for the community and encouraging immigration to the Land of Israel. He persuaded the Jews of various countries to set aside Purim as a special day for making contributions to the Land of Israel. Many students from the Diaspora, among them R. Solomon Adani attended his yeshivah in Jerusalem. Ashkenazi visited Egypt again in 1591, and appears to have returned to Jerusalem.

Much of the Shitah Mekubbeẓet is still in manuscript. Part of it has been lost, but is occasionally referred to in books by other authors. All of the available material on some tractates has been published; but only selections of others. The following commentaries under the title Shitah Mekubbeẓet have been published: Berakhot, the collection in Berakhah Meshulleshet (Warsaw, 1863), incorrectly attributed to Ashkenazi, and is most probably by R. Yom Tov b. Abraham Ishbili ; Beẓah, the collection attributed to Ashkenazi at the end of Naḥalah li-Yhoshu'a (Constantinople, 1731), of R. Joshua Soncino is – according to Epstein's opinion – by a disciple of Nissim Gerondi; Ketubbot (Constantinople, 1738); it is doubtful whether Nedarim (Berlin, 1860) and Nazir (Leghorn, 1774) are by R. Ashkenazi; Sotah (Leghorn, 1800) is contained in Yagel Ya'akov of R. Jacob Faitusi ; Bava Kamma (Venice, 1762); Bava Meẓi'a' (Amsterdam, 1721); Bava Batra (Leghorn, 1774) up to page 133. The remainder was published under the title of Shi'urei Shitah Mekubbeẓet in the Yad Ramah (Salonika, 1790) of Meir ha-Levi Abulafia; Sanhedrin – sections in Sha'ar ha-Melekh (Salonika, 1771) of Isaac Nuñes Belmonte and in Ḥamra ve-Ḥayyei (Leghorn, 1802) of R. Ḥayyim Benveniste; Zevaḥim Bekhorot, Menaḥot, and most of Seder Kedoshim in the Romm Talmud edition (first published in Mizbaḥ Kapparah by Jacob Faitusi (Leghorn, 1810) and other books). The Shitah to the smaller tractates of Seder Kedoshim is very much abbreviated.

R. Ashkenazi published glosses on the text of the Mishnah and the commentaries on the Mishnah of R. Samson of Sens and of Maimonides . His glosses on Samson's commentary on Pe'ah and Demai were published by J.L. Maimon (Sinai Jubilee Jubilee Volume (1958), 102–25), as were his glosses to Maimonides' commentary on the Mishnah of Zevaḥim and Menaḥot in the same author's Rabbi Moshe ben Maimon (1960), 251–90. Ashkenazi also annotated the Babylonian and Jerusalem Talmuds, his glosses on Yoma being published by Aaron Jellinek in Kunteres ha-Mazkir (1877), 20–26. Derekh Tamim, glosses on the works of R. Isaac Alfasi and R. Nissim Girondi were published in Tummat Yesharim (Venice, 1622) of Benjamin Motal. His glosses on Books 9–13 of Maimonides' Mishneh Torah are in the library of the Jewish Theological Seminary (Ms. 825) in New York. Ashkenazi compiled Kelalei ha-Talmud, general rules of talmudic methodology excerpted from the geonim and rishonim (published by A. Marx in Festschrift D. Hoffmann (1914), Hebrew section 179–217). He also wrote responsa (Venice, 1595) and composed sermons and poems.