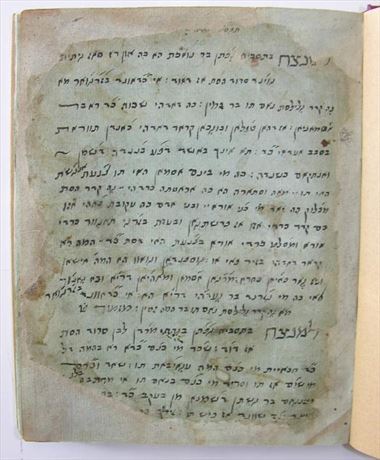 Tafsir (commentary and translation) to Psalms in Judeo-Arabic (Persian?). The Author's name is not provided, however, the first Arabic translation and partial commentary to the Bible (Tafsir) was written by R. Saadiah Gaon. It has remained the standard Bible for Arabic-speaking Jews. He first prepared a translation, probably of all books of the Bible with an extensive commentary designed for learned readers, and then proceeded to write a popular translation which, as its name Tafsir (commentary) indicates, was both translation and commentary. In order to make it accessible and intelligible to the ordinary reader, he did not confine himself to a literal translation, but translated freely, sometimes disregarding syntax or paraphrasing the whole chapter. The Tafsir is rational, and R. Saadiah goes out of his way to eliminate all anthropomorphisms. Unlike many other Jewish scholars who wrote in Arabic, he used the Arabic and not the Hebrew alphabet.

The recital of the whole Book of Psalms is widespread, whether as an act of piety by saintly individuals, or by groups of unlearned people. For this purpose "societies of reciters of psalms" (hevrot tehillim) were and continue to be formed, and in recent times a special society has been formed in Jerusalem whereby two separate groups recite the whole Book of Psalms daily at the Western Wall. The psalms are included in their entirety in all large prayer books.