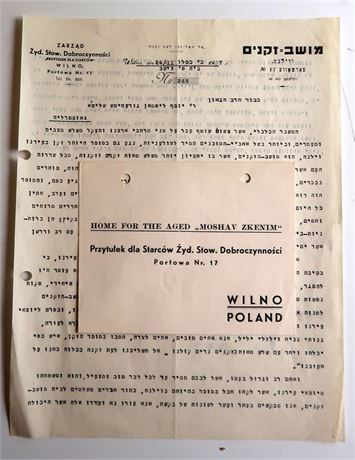 Long typed letter by the board of the communities “Moshav Zekeinim” (old age home) of Vilna to R. Yosef Gurwitz of Melbourne, Australia. With a detailed description of the importance of the old age home and requesting financial assistance. At the end of the letter are two lines of hand written text with signature by R. Chaim Ozer attesting to and reiterating what was written in the letter.

R. Hayyim Ozer Grodzinski (1863–1940), talmudic scholar and one of the spiritual leaders of Lithuanian Orthodox Jewry, son of the talmudic scholar, R. Solomon David Grodzinski (1831–c. 1908). R. Grodzinski studied in the yeshivot of Eisheshok and Volozhin, where he was known as an illui (prodigy). In 1887 he was appointed one of the dayyanim of the bet din of Vilna, and he came to be regarded as its leading dayyan. R. Grodzinski was one of the initiators of the Vilna Conference of 1909, which resulted in the formation of the Orthodox Keneset Israel organization. He also participated in the founding conference of the Agudat Israel at Katowice in 1914, served as a leading member of that party's Council of Sages, and was the prime force for spreading its influence in and around Vilna. An initiator of the conference of rabbis at Grodno in 1924 which founded the Va'ad ha-Yeshivot ("Council of the Yeshivot") for the spiritual and material support of yeshivot and their students, he was the moving spirit behind the Council. R. Grodzinski was a vehement opponent of Zionism and of secular education for Jews, his aim being to preserve the Torah milieu of the Lithuanian yeshivot and townlets intact. In 1934 he prevented the transfer of the Hildesheimer rabbinical seminary from Berlin to Tel Aviv. Asked by an Agudat Israel kibbutz whether it was permitted to settle on Jewish National Fund land, he advised its members "Let him who is firm in spirit stay steadfast in his place and not hurry to join the swelling stream… until God has mercy on His people and hastens his redemption." In 1929, when R. Isaac Rubinstein was chosen as chief rabbi of Vilna, Grodzinski's supporters sparked a violent controversy in the community. R. Grodzinski's responsa were published in three volumes under the title of Aḥi'ezer (1922, 1925, 1939). In the introduction to the last volume, written on the eve of the Holocaust, he spoke of the fear and dismay that was rapidly descending upon the entire Jewish people, both in the Diaspora and (in a reference to the 1936–39 riots) in Ereẓ Israel. He wrote about the spiritual disintegration of the Jewish community, and its laxity in the observance of the Sabbath, kashrut, and the laws of marital purity. All this he blamed on the Reform movement in the West and on secular education in the East. His sole consolation was in "the important work of preserving and strengthening Torah education" and in the fact that "the large and small yeshivot were the strongholds of Judaism… in Poland and Lithuania."