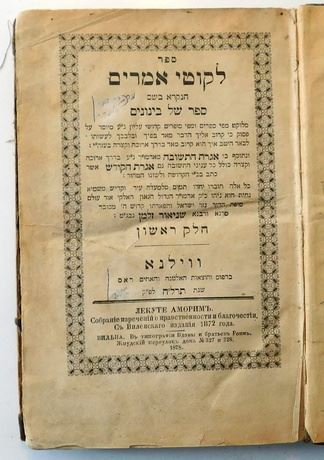 Tanya is the first and primary work of the Habad system, first published anonymously in 1796. R. Shneur Zalman himself calls the book Likkutei Amarim ("Collected Sayings"), but on the title page of the second edition it is designated "Tanya," and it has continued to be widely known by this name ever since. Tanya presents a complete and consistent system, which develops out of the determination not to "fail" in precision of terminology and logic. This gives rise to complicated syntax and lengthy sentences, which makes the subject difficult to comprehend. However, the Tanya is one of the few works of Hasidism which is not a collection of discourses but a complete systematic exposition, and by the originator of the system himself. When the book appeared, it was criticized adversely by both maskilim and Mitnaggedim, and even by the Hasid, R. Abraham of Kalish. But it eventually was greatly appreciated for the profundity of its thought and organized structure.

R. Shneur Zalman of Lyady (1745–1813), founder of Habad Hasidism was, according to family traditions, was born in Liozna, Belorussia, on the 18th of Elul. After his marriage in 1760 he devoted himself to Torah study. Concluding that he knew "a little about learning, but nothing about prayer" in 1764 he decided to learn about Hasidism from R. Dov Baer the Maggid of Mezhirech, leader of the hasidic movement. In Mezhirech he became one of the inner circle of the Maggid's pupils. He also studied as a friend and pupil with Abraham b. Dov Baer. Although R. Shneur Zalman was one of the youngest pupils, the Maggid had a high opinion of him, and in 1770 delegated to him the task of composing a new and up-to-date Shulhan Arukh. Shneur Zalman worked on this book for many years, but published only small parts of it. About one-third was printed posthumously (the rest had been destroyed by fire) and is known as the "Shulhan Arukh of the Rav" (1814). Though not a hasidic work, it represents - as the Maggid had intended - a great halakhic achievement. It evidences R. Shneur Zalman's superb Hebrew style, his ability to provide lucid explanation, and profundity without complexity. It became an authoritative halakhic source among the Hasidim of Lubavich. In 1774, during the early period of the opposition to Hasidism by traditional Jewry, R. Shneur Zalman and R. Menahem Mendel of Vitebsk went to Vilna in an attempt to meet with R. Elijah b. Solomon, the Gaon of Vilna, and reach some kind of understanding between the Hasidim and Mitnaggedim, but the Gaon did not agree to meet them. After R. Menahem Mendel went to Erez Israel with many of his followers, R. Shneur Zalman was left with two others as a deputy leader in Rydzyna (Reisen, Belorussia and adjoining areas). In 1788 R. Menahem Mendel formally appointed Shneur Zalman as hasidic leader of Reisen: this was really only a post facto appointment, as he already had many devoted personal pupils. It had become apparent that R. Shneur Zalman had created a distinct type of Hasidism, to become known as Habad.

R. Shneur Zalman was one of the great Jewish personalities of his age, as great a scholar in talmudic studies as in Kabbalah. He had a wide knowledge of science and mathematics, and his powers as a systematizer were enhanced by a fine style. Yet he was also a mystic, and deeply emotional; he composed hasidic melodies and was a charismatic leader. All these qualities blended in a strangely harmonious way. His work is masterly on every subject, an almost unique combination of mysticism and common sense. His other important works are Likkutei Torah (Zhitomir, 1848), Torah Or (1836), and Ma'amarei Admor ha-Zaken (1958–60).