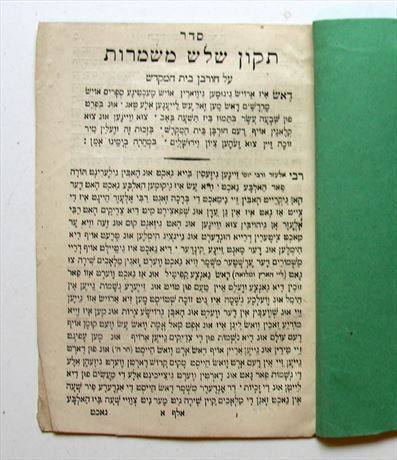 Liturgy in Yiddish for women to recite at midnight and appointed times in memory of the destruction of the Temple and for the restoration to the Land of Israel. This custom developed from the rabbinic description of G-d mourning the destruction. It is recorded that during the night He "sits and roars like a lion, exclaiming: `Woe to the children, on account of whose sins I destroyed My house and burnt My temple and exiled them among the nations of the world'" (Ber. 3a). The hour of midnight was chosen because David arose at this hour to study and pray, as it is said, "At midnight I will rise to give thanks unto Thee" (Ps. 119:62; Ber. 3b–4a).